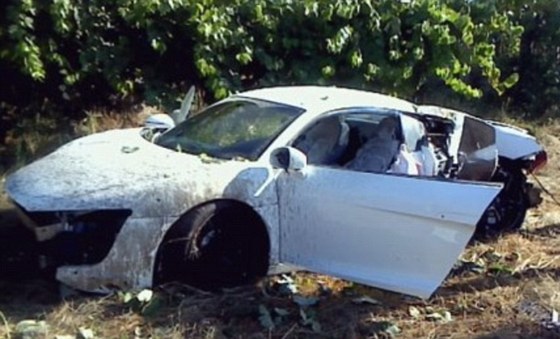 Less than a day after news of Manchester United's midfielder Anderson being pulled out of a crashed car surfaced, the photos showing what's left of his Audi R8 were made public. The photos point to the severity of the crash and, if anything, are a reminder of a very close call for the 22-year old footballer.

Anderson was traveling on a rural road near Braga, Portugal, on his way back from the Sardinha Biba nightclub, where he had reportedly spent the night. Apparently, Anderson was not driving the car when the crash occurred.

According to Daily Mail, the footballer's car left the road at one point, smashed into the wall of a local farm, flew 100ft in the air and ended up in a field. Those who witnessed the crash managed to get to the car and pull Anderson out moments before the car burst into flames.

"I saw a cloud of smoke ahead of me. The car was unable to straighten up after a slight bend and went into the field and caught fire. I thought he was dead. My brother dragged him out," said Almeno Antunes, one of the people to reach the scene first.

As we reported earlier today, Anderson escaped with only minor injuries, being released from the St Mark's hospital several hours after being admitted. The player's spokespeople say Anderson went through an “almighty scare.“

The other two people who were in the R8, a man and a woman, also managed to escape with only minor injuries.