5 Unique Torch Red Pandem Widebody C8 Chevy Corvette Up for Grabs at No Reserve
Car video reviews:
Up Next

Challenger Scat Pack vs. The Detroit World Is a Lesson Full of Quick Drag Runs

With the 2021 Chevy Corvette production firmly underway, the rumor mill already focuses on all the juicy details pertaining to the next model year iteration. And, as always, some look more spectacular than others, even if we don’t actually get to see the actual sports car coming along for the ride as well.
4 photos

We are getting closer and closer to that fabled moment of the year when fans of “America’s sports car” and automotive aficionados from across the world get acquainted with the latest Corvette model year. In the meantime, the rumor mill is also hard at work trying to come up with all the novelties beforehand.

As always, details about the new iteration gradually come out of hiding, and this time around, we get to focus on one of the C8’s upcoming new colors. One might remember that about a month ago, we caught word that Chevrolet has decided to add three new exterior shades: Amplify Orange Tintcoat, Hypersonic Gray Metallic, and Caffeine Brown Metallic.

Unfortunately, three other popular colors will bite the dust, with the ones mentioned above rumored to represent worthy successors for Sebring Orange, Shadow Gray, and Zeus Bronze. Interestingly enough, the host of the HorsePower Obsessed YouTube channel claims the news was met with a bit of backlash since these colors have been quite popular with buyers, especially Sebring Orange.

The channel also uncovered a paint sample of the new GC5 Amplify Orange (remember, these are internal names from GM, so the shade could be labeled differently when premiered) which is actually an unofficial leak originating from midenginecorvetteforum.com.

Apparently, someone snatched the paint codes off the internet and enlisted a professional body shop painter's help to come up with a couple of spray-out cards. By the way, the looks may be entirely deceiving as the photo was snatched by a smartphone with the flash on and the fact the cards were taken out in the sun doen't benefit either.

That said, although many would think otherwise, the darker hue seen on the right card is actually G26 Sebring Orange Metallic. The new Amplify Orange is seen on the left, and we can understand why it’s being labeled to have an effect akin to the flatter Rapid Blue, which is a very popular hue on C8 ‘Vettes. 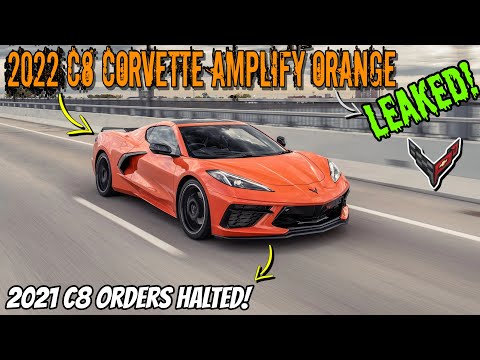