Ammonia is hugely popular in agriculture, serving both as a valuable nutrient and as a base for common fertilizers for decades now. But lately, it’s attracted attention for another potential use: as fuel that can replace gasoline and diesel and can help cut harmful emissions.
7 photos

We’ve already seen ammonia being considered to power vessels, trucks, and they’re also flirting with the idea of using it in aviation. Now, it’s being tested as an alternative fuel for heavy-duty vehicles as well. Brooklyn-based company Amogy aims to decarbonize transportation by offering emission-free and high-energy-density power solutions that can replace our traditional fuels. The company recently announced that it reached an important milestone in its journey, using ammonia to power a tractor for the first time ever.

Amogy integrated its “highly-efficient ammonia-to-power technology” into a John Deere mid-size standard tractor. The demonstration was held in New York, in the Research & Development Park at Stony Brook University.

Amogy’s system, which consists of a standard liquid-storage tank and ammonia-cracking modules integrated into a hybrid fuel cell system, can produce enough power for several hours of operation per refueling. As for the refueling process itself, Amogy claims it's no more time-consuming or challenging than filling up the tank of your car at a gas station. During the demonstration, the modified John Deere tractor was driven for separate periods, with a refueling session in between.

Amogy says that ammonia has the potential of becoming a leading fuel for heavy-duty vehicles, as it offers a high energy density and there are plentiful existing infrastructures such as pipelines, terminals, and storage methods to support such a transition, not just in the U.S. but also globally.

This isn’t the company's first success with ammonia as fuel. Back in 2021, the company also demonstrated what it claims to have been the world’s first ammonia-powered drone flight. And it doesn’t plan to stop here, announcing its intention to also prove the benefits of its technology in trucking and shipping. In the next 12 months, its demonstrations will also include Class 8 trucks and shipping vessels, all with the ultimate goal of replacing polluting diesel engines with its next-generation, emission-free solution. 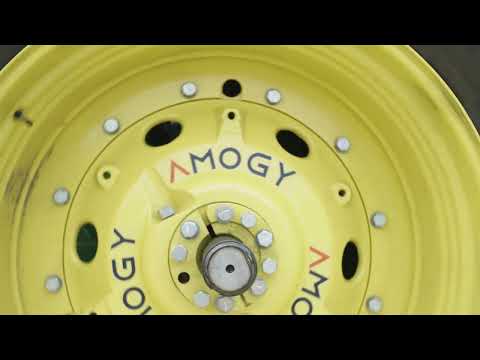