These days, Lotus is busier making electric cars than staying true to the brand's core values, the very ones that gave the Norwich-based automaker the cult status it still enjoys.
9 photos

Whenever you heard the name "Lotus", you knew exactly what you were getting: a car that favors a lightweight construction to huge amounts of power, puts handling above straight-line acceleration, and, above all else, is there for the ultimate pleasure of its driver. Can you think of a modern car that's made in this type of mold?

It's easy to look at this Lotus Exige build and dismiss everyone who gets overly excited by it (everyone, then) as being too nostalgic and living in the past, but if the past is this cool, then what's so wrong about that? It doesn't make the present bad, it merely highlights what we are missing.

This yellow track car (perfectly street-legal, though) that strongly resembles a Lotus Exige is actually fully custom-built by its owner. It took Quentin the better part of the last five years or so to complete it, and when you see and hear about everything he's done to it, you'll understand why.

The body is made entirely out of carbon fiber, and since there were no options on the market, they had to create the molds themselves. However, since Quentin is a self-declared perfectionist, the whole thing looks like it came out of a factory this way. There's none of that DIY feel you get with some of these builds (not that there's anything wrong with that either) as everything looks quite professionally done.

Things don't change much once you get inside. The dashboard resembles that of an Exige, and that's because they used an original one to create the molding for the carbon fiber copy they eventually installed. It is primarily a track car, so don't expect any quilted leather, yet the quality of the execution still deserves a mention.

However, everything would have been in vain if Quentin hadn't installed the correct engine. The model came with a 1.8-liter four-cylinder supercharged Toyota engine, which never went over the 300 hp mark in a road-going Exige. Not that it wasn't enough to make a sub-ton sports car enjoyable, but Quentin had a different plan for his unique build.

He ordered a Mercedes-Benz SLS AMG engine from the Netherlands (he lives in South Africa), and that's because he considers the hand-built 6.2-liter naturally aspirated unit was the last "proper aspirated engine built by AMG". Well, even if it would have given it a lot more power, you do feel like a turbocharged unit would have taken away so much of the fun.

Quentin says the car now weighs 2,535 lbs (1,150 kg) with him inside, which means all that carbon fiber couldn't offset the mass added by the big engine and everything else that came with it. Even so, it managed to keep the value close to the original's, meaning the widebody custom-built Exige must still handle like a dream.

In terms of power, he says the car makes 570 horsepower at the wheel at "a higher" altitude. He reckons it could make about 650 hp at sea level, which is probably the best pretext we've ever heard in a while for a seaside holiday. 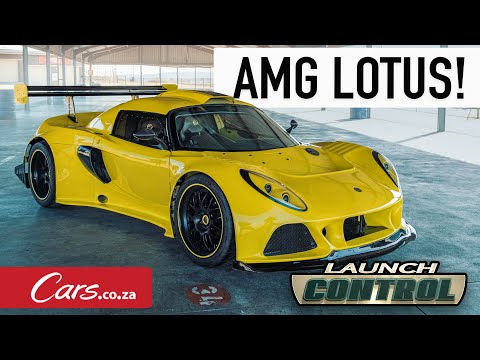