Mercedes-Benz is no stranger to building cool open-top models and has both cabriolets and roadsters in the extensive range. But a Mercedes C-Class Cabriolet is not something you would expect to see at the Dragway trying to build glory for itself in both traditional quarter-mile and roll races. Even if we’re actually dealing with a feisty Mercedes-AMG C 63 S Cabriolet.
30 photos

The owner of this white example obviously begs to differ. Of course, there’s also a little tuning secret up this ride’s sleeve. That’s because, according to the description provided by the Drag Racing and Car Stuff YouTube channel for a recent video from both the Atlanta and Bristol Dragway Street Car Takeover events, the German convertible hasn’t arrived at the strip in stock form.

Instead, it sports upgraded turbos, a Solo Motorsports Tune, as well as a methanol injection. If that’s enough to fight against the cream of the crop, it remains to be seen (during the next eight minutes or so). But at least we can be sure these tasty upgrades ensure the C 63 S can go at it all day (and night) long, because after the classic quarter-mile skirmishes, there’s also bonus footage (from the 6:06 mark) with a series of roll races.

We’re a bit more traditional in focus, though, and very much appreciate the action starting with a bang (not of the real kind, like the ones performed by the Pontiac GTO from 5:25) as the first competitor lining up with the C 63 S Cabriolet is a red and mighty 2020 Ford Mustang GT500. The battle is settled early on with the Mercedes driver nailing a slow start, hence the 10.38s to 11.93s result in favor of the Shelby.

Next up, from the 1:20 mark, comes yet another famous Blue Oval, a modern Boss 302. This time around, the Cabriolet’s driver doesn’t waste any more time looking at the scenery, which translates into a bus-lengths apart gap in its favor, nailing a much better 11.13s to 12.72s result.

It seems the Blue Oval representatives don’t want a tie, so from 2:25, a New Edge Mustang comes out to play, and it’s the only one posting a cool ET of 11.47s and getting the green light at the end of the drag strip. From then on, the C 63 S becomes more careful and shows it’s relentless in taking the battle to a Chevy SUV and truck, then a Pontiac GTO, always delivering the better ET result. 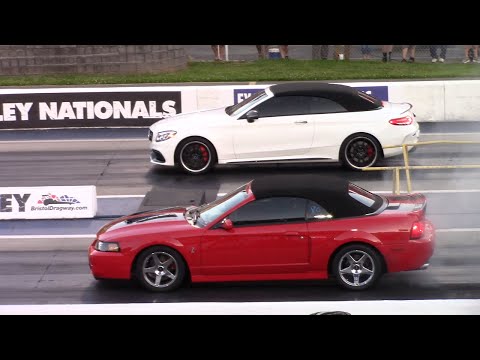