American Scene Hot Wheels Get Released From Their Plastic Prison, Take Your Pick

Dragos Chitulescu
Collecting Hot Wheels vehicles can become troublesome after a certain point. Sure, you won't have issues finding a place for 10 diecast cars, but what if you're up to 100 or more? Also, at one point you'll find yourself spending hours in a row looking for the missing parts of your collection. And that's just the start of it all.
25 photos

But I've said it before and I'll say it again. Collecting Hot Wheels is still a reasonable hobby to have. It's still infinitely cheaper than owning 10 cars, all of which are old, rusty, sporty vehicles that require a lot of attention. Speaking of which, in recent months there have been complaints from Hot Wheels collectors that Mattel hasn't been putting out enough American-built diecast cars. And by the looks of it, someone in the company has been listening.

We've already seen the first 4 cases of 2022 mainline models being unboxed by several collectors. The next one will be case E, and fans are already anxious to see what's new inside that one. By the looks of it, a Super Treasure Hunt Corvette C8 is up next, and we might even get the new LB Super Silhouette Nissan S15! But before we get to that point, let's have a look at the first Car Culture set for 2022.

If you're new to Hot Wheels, here's a reminder: the Car Culture sets were created for adult collectors. These 1/64 scale vehicles come with metal bodies and real rubber tires. Of course, this means that they are priced differently from the mainline vehicles. You can get the new American Scene 5 diecast set for $41.95, although some stores will only sell you a case of 10 items for double that amount, of course.

The first car of this set is the Chevrolet Corvette C8.R. You can tell that this has been a successful casting seeing that it was first launched earlier this year and that there are 4 versions of it on the market already. You can get a mainline version of it in yellow, silver, or red. Or you can opt for the yellow Team Transport version and now for the 2022 white, red, and blue model. It did look pretty good before, but it's certainly a stunner with the new wheels.

Muscle car fans will be delighted to get their hands on the 1969 Chevrolet Chevelle SS. This casting has been around since 2008 and this would be its 21st appearance on the market. Mattel included a Ford model in this set to appeal to the Blue Oval enthusiasts too: the Bronco R! This marks the 4th recolor of this truck within just 1 year since it was first launched.

The 4th car included in the set is a 2020 Dodge Challenger Hellcat, a vehicle that has also been featured in the "Furious Fleet" series earlier this year. At least this version looks a bit more interesting in Acid Green than it did in black. Last but not least, we get to see the only new casting of the American Scene set: a Tesla Roadster! Perhaps silver isn't the most exciting color for this car, but I guess that's one of differentiating it from the rest of the ICE-powered machines in this set. 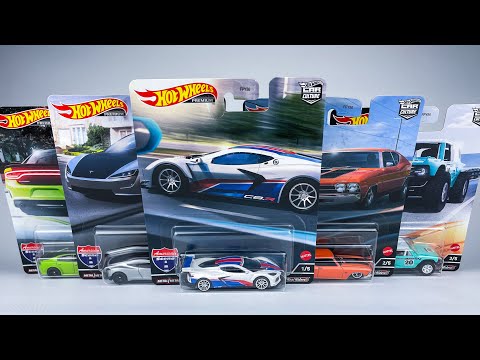