4 1974 AMC Javelin Was a Different Breed of Pony Car

5 Are These the First Crossovers Ever Made?
Up Next

AMC Eagle: One of the Most Influential Yet Underrated American-Built Vehicles of All Time

Vlad Radu
Forgotten or often ridiculed by younger enthusiasts because of its mundane design, the AMC Eagle was America’s first mass-produced passenger car with four-wheel drive and one of the first crossovers ever built.
18 photos

During the 1970s, the automotive industry in the U.S. was hit by two energy crises and manufacturers had to improvise in order to stay afloat. Downsizing became the norm, giving birth to the period that is now referred to as the Malaise era or the dark age of American design.

AMC (American Motor Corporation) was one of the companies that adapted quickly, creating inexpensive and fuel-efficient models such as the Gremlin, Hornet, and Pacer. They also purchased the Kaiser-Jeep Corporation along with its government contracts and began revitalizing the Jeep brand.

By 1975, in a bid to expand their model range even further without investing a ton of money in development, management began exploring the feasibility of a vehicle that would combine the handling and comfort of an existing AMC passenger car with the off-road capabilities of the iconic Jeep. The initial proposal for production was the brainchild of Roy Lunn, the company’s chief design engineer at the time and the man who helped create Ford’s iconic GT40 or Mustang I prototype.

Codenamed 8001 plus Four, the project kicked off in late-1976. With the help of British 4WD experts FF Developments, a prototype was ready for the road in less than a year. It was based on a V8-powered Hornet and employed a capable four-wheel-drive system from its Jeep siblings with 66 percent of the drive torque directed to the rear wheels.

After another year of testing and development, the team decided to use the body of the newly released Concord as the base for the new vehicle. Furthermore, ride height was increased, the torque split was tuned to a more even ratio, and the V8 was dropped in favor of the company’s more fuel-efficient straight-six.

Released in August 1979 as a 1980 model, the AMC Eagle took everyone by surprise. Available as a four-door sedan and or wagon as well as a two-door coupe, it could easily conquer mud, sand, snow, and obstacles that ordinary passenger cars couldn’t handle.

Regardless of the body style, all models were powered by a 4.2-liter six-cylinder equipped with a Carter two-barrel carb that produced 110 hp and 210 lb-ft (285 Nm) of torque. The engine worked in conjunction with a three-speed automatic and a Jeep-sourced Quadra-Trac permanent 4WD system.

The front end had an independent suspension system and an offset Dana 30 differential while at the rear, a Dana 35 live axle sat on leaf springs.

Although some early cars came with an NP203 transfer case, most 1980 models got the state-of-the-art NP119 variant. It employed a velocity-sensitive viscous coupling, which also limited slip, and its silicone-based fluid was more effective at maintaining optimal viscosity through a wide temperature range.

Customers could choose from three distinct trims: Standard, Limited, and Sport, all of which offered features like power steering, power front rotors, and rear drum brakes. The Limited added several upscale goodies such as leather seats, AM radio, woodgrain tilt-steering wheel, or power locks. Those who opted for the Sport (available on the coupe and wagon) got a sportier leather-wrapped steering wheel, high-beam halogen lights, fog lights, dual remote mirrors, Tiempo steel-belted radial tires, and a host of unique exterior enhancements.

To make the Eagle look even crazier, AMC began a partnership with the Griffith Company for the conversion of several coupes into convertibles. Known as the Sundancer, this weird version of an already unusual car was sold between 1981 and 1982 but it’s unclear how many coupes got the open-top treatment.

During its eight years of service as an AMC model, the Eagle received a host of mechanical improvements and visual enhancements. Two new subcompact variants known as the Series 50 models were introduced in 1981. One was the budget-friendly Kammback that proved unpopular and was dropped for 1983, while the other was a sportier liftback called SX/4 which survived until 1984. You can see what this model was capable of in the period-correct YouTube video below, courtesy of 81eagle.

After Chrysler took over the AMC assets in 1987, they decided to continue building the popular wagon version for the 1988 model year. Rebranded Eagle Wagon, it included standard features like air conditioning, rear window defroster, or an adjustable steering wheel, all of which were previously optional.

We can’t all agree that it wasn’t pretty, but its beauty lies underneath the boxy bodywork. Way ahead of its time, the AMC Eagle was the epitome of a bold idea that would revolutionize the automotive industry. Combining a unibody frame with a capable four-wheel-drive system paved the way for a new breed of vehicles that have become extremely popular today. 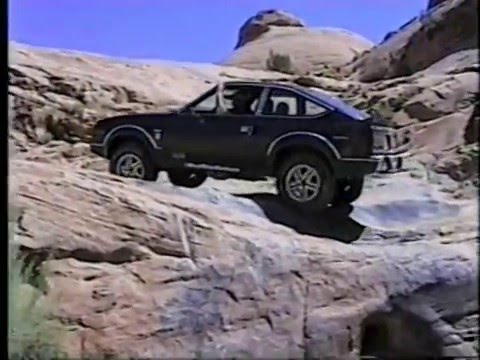