1 Analyzing the ‘Skateboard’ Architecture of the Rivian R1T and R1S

5 Is the Rivian R1T Truck Worth It? Amazon Seems to Think So
Car video reviews:
Up Next

Rivian's engineering team burned the midnight oil to develop a new delivery van for Amazon. They worked like their life depended on it, and, in some ways, it did. But the result finally came two years later, even if they worked remotely due to the COVID-19 pandemic situation.
5 photos

They started with the traditional look of a delivery van that didn't leave much to the imagination. After all, it was just another metallic cube on wheels, right? Wrong! They managed to create an entirely new front design with round LED headlights and a grille good for nothing since no internal combustion engine was under the hood.

Amazon plans to introduce at least 10,000 electric vans by 2022, but that will be a difficult task for Rivian, which has already postponed the production of its trucks and SUVs. Rivian's production plant from Normal, Illinois, had to find some ways to make room for its vehicles and squeeze them in the production line between the delivery vans.

Like most of the other delivery vehicles, either white or brown, Amazon's vans feature front sliding doors and flat surfaces so they can fit more packages inside. Unlike other vans from its competitors, the new Rivian LCVs have Level 2 Autonomous driving capabilities since the American carmaker already had that technology incorporated into the R1T and R1S vehicles.

Amazon is committed to reducing its carbon footprint to zero by 2040, ten years before the Paris agreement. Its investment in Rivian will get the online retail giant, in return, a fleet of 100,000 vehicles. That's not a bad price for a custom-made van. As expected, the American carmaker cannot sell the same kind of vehicles to Amazon's competitors, which are already developing their own.

The first vans are already on the Los Angeles streets, and this year another 15 cities will follow. They use the same platform, a.k.a. skateboard, as the Rivian R1T and R1S vehicles. 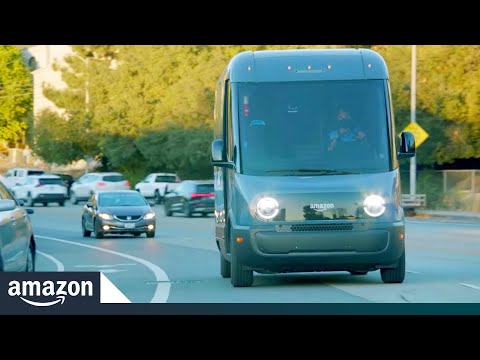