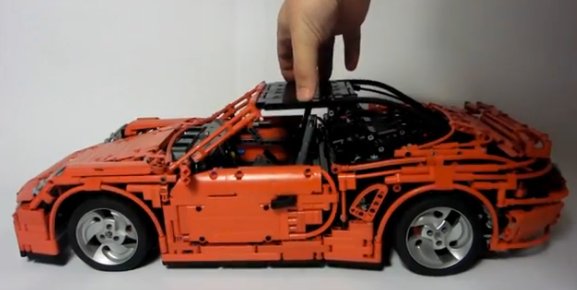 When having too much time on their hands people sometimes create the most amazing things, with unusual toy cars included. Among the most interesting toys ever made stands out the “taylor made” Porsche. This is a one of a kind Porsche 911 Turbo masterpiece created in LEGO, with an amazing attention to detail.

The most unbelievable thing about this “big boy’s toy” is that it has most of the functions that the real model has, and respects nearly all the technical specifications of the manufacturer.

Specific attention was paid to details, which are mind-boggling. Details such as the fully functional hood,retracting spoiler, working disc brakes, all wheel drive with three differentials, locking doors, automatic hand brake plus the hood that can be opened from the interior and the roof retracts automatic.

The Lego Porsche 911 is powered by 8 motors, and also has 3 Remote controllers, 3 IR receivers, 3 pair of lights and almost 7 meters of wires. Counting the technical specs it doesn’t sounds like a LEGO toy anymore, does it?

It took nearly 3500 parts to complete the masterpiece arriving at a total weight of 3.65 kg of LEGO magic. Taking a closer look at the model you can see the actual boxer engine scaled down reving at full throttle as shown in a video posted at Autoblog UK.

The most eye-catching feature is the working double-clutch gearbox that can be viewed up close when changing through gears. It might not shift gears in a split of a second like the Porsche’s PDK, but it has more charm that the original one due to the fact that you can hold it in your hand, while it works its magic.

It is certainly a one of a kind toy that should be off limits for the kids, and comes as more a proof of what some people are capable of when they have a lot of time to spare.