1 NASA's Ingenuity Takes Off on Mars, Snaps Photo of Its Shadow

4 Ingenuity Helicopter Didn't Fly on Mars This Weekend, to Try Again on April 14

5 Ingenuity Blades Start Spinning on Mars, Reach 50 RPM
Up Next

Daniel Patrascu
A historic moment for space exploration took place on Monday in the Jezero Crater on Mars: a human-made helicopter thingy spun its blades, took off and hovered for a brief period over the reddish soil, and then landed. It was the first time ever that a “controlled, powered flight on a planet beyond Earth” was achieved, and here’s a video to prove it.
1 photo
Although close to 24 Earth hours have passed since the event, we’re only now getting our first glimpse of what the flight really meant. Because of the distance between Earth and Mars, it took a while for the images from the Perseverance rover, who observed it, to reach us. You can see the entire amazing 1-minute adventure in the video attached below.

There are many noteworthy things about this, but one that really stands out is the fact Ingenuity flew on its own, relying only on programming sent from our planet beforehand. That’s because the same distance that prevented us from seeing the event in real-time also made remote controlling the thing impossible.

“Now, 117 years after the Wright brothers succeeded in making the first flight on our planet, NASA’s Ingenuity helicopter has succeeded in performing this amazing feat on another world,” said in a statement NASA Associate Administrator for Science Thomas Zurbuchen.

“While these two iconic moments in aviation history may be separated by time and 173 million miles of space, they now will forever be linked. As an homage to the two innovative bicycle makers from Dayton, this first of many airfields on other worlds will now be known as Wright Brothers Field, in recognition of the ingenuity and innovation that continue to propel exploration.”

Ingenuity is small in size, measuring 19.3 inches in height (49 cm) and weighing just 4 pounds (1.8 kg). It has no science instruments onboard, as its only mission was to demonstrate helicopter flight is possible on another planet, especially on Mars, where the atmospheric density is only 1 percent that of Earth and the gravity one-third. 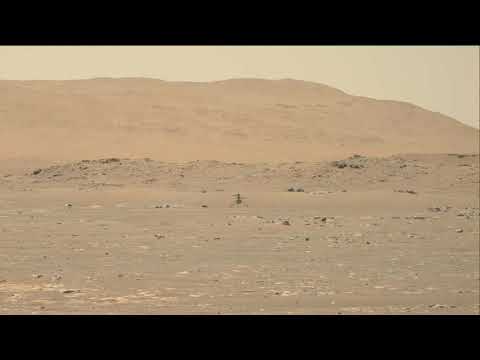