5 Alpine A110 Convertible Design Study Revealed, It's Fully Electric As Well
Up Next

Here’s a Realistic Take on the All-New 2024 BMW X2 Crossover – What's There to Hate?

Cristian Gnaticov
Actually, make that water vapors, and warm air, which is the norm when it comes to all hydrogen-powered vehicles, including the brand-new Alpine Alpenglow Concept.
53 photos

Celebrating its public premiere at the 2022 Paris Motor Show, almost one week after it was unveiled online, the Alpine Alpenglow Concept is not destined for production, but it does preview some of the brand’s upcoming models, both for the road and track.

Named after the reddish light that appears over the mountains before sunrise and after sunset, it looks like a mix between a hypercar and an endurance racer, with a sci-fi movie flair. The aerodynamic body has dramatic proportions and measures more than 5 meters (197 in) from bumper to bumper. It is over 2 meters (79 in) wide, and less than 1 meter (39 in) tall.

Inside, it has room for the driver only, who sits in a central position flanked by the dual hydrogen tanks. Unleashing hell upon its opponents is done via the ‘overtake' button on the steering wheel that is shaped similarly to those in F1. There are two integrated dials here too, and if you wanted to find out more about the hydrogen-powered motor, then you’ll be disappointed to learn that the Renault-owned brand has yet to detail it. 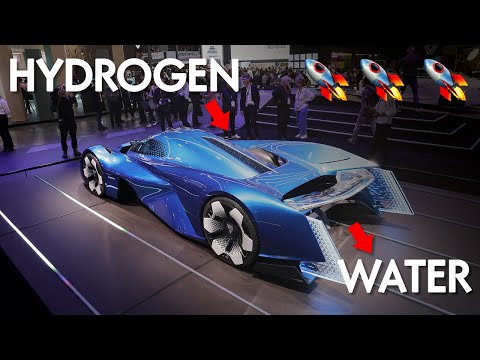