Alpine A110 Struggles in Moose Test

Home > News > Car Profile
Mihnea Radu
We've seen it time and time again: cars that are set up to be fun don't do well in the slalom or moose test. That includes the brand new Alpine A110 sports car. But that's a good thing, right?
3 photos

We've been following the "dodge maneuver" tests of km77 for many years, and we're honestly not surprised that the A110 has problems. Just to give you a few examples, a Nissan Pulsar, which is one of the dullest cars you can buy, performs better than a Golf GTI. Likewise, you'd think that an i30 N sticks to the asphalt better than an i30 Fastback, but that's not the case.

The so-called moose test (even though there are no mooses in Spain) is meant to simulate what would happen if you had to suddenly avoid an obstacle in the middle of your lane and return before hitting oncoming cars. It's about quick but very stable changes of direction where the back end stays planted. But that's the very definition of boring.

Alpine could have set the ESP in a safe, slide-free manner, but you would be left with the handling of a Hyundai Tiburon. At 77 km/h, the A110 completely misses the last set of cones and goes off the theoretical road, which implies it would crash in the real world.

While the car passes the test at 75 km/h, it still slides around "unpredictably." The magazine says that even in the normal driving mode, where the nannies should have been at work, they don't intervene to stop the car from sliding. However, the results weren't all bad, as the Alpine performed well in the high-speed slalom.

Right now, the setup for this aluminum-bodied Porsche Cayman rival consists of a 250 horsepower 1.8-liter turbo with no diff. We suspect the "cup" version coming with 300 HP will be a little more stable and planted. 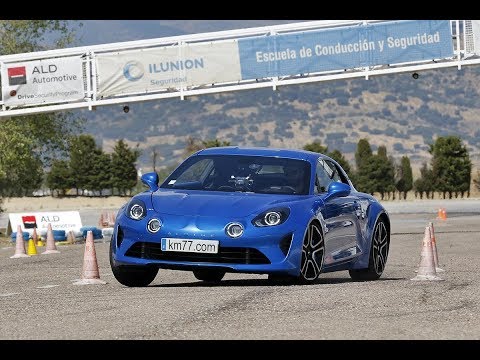