1 One Alpine to Top Them All: New A110 R Coming Next Week to Take Your Breath Away

Renault takes a swing at compact, powerful road-legal race cars with the addition of… one letter to its A110 lineup of performance machines. The French company announced the A110 R, a lightweight version of the A110 S. The latest member of the Renault performance brand is one ripped racer for everyday use.

The press release states that the most significant change distinguishing the R from its S cousin is bodyweight – a diet rich in (carbon) fiber helped the A110 R shed 75 lb (34 kg). The mid-engine two-seater now weighs in at 2,385 lb (1,082 kg).

The Formula One carbon-worshipping belief inspired this “radical” A110 (radical is Renault’s choice of words), so the hoods, wheels, and seats got the whole package. The front got the spoils, with the hood getting a whole-body cosmetic treatment.

As such, it is a new design - dedicated to the A110 R - 2,9 kg lighter than the hood on the other performance poised A110, the S. The carbon fiber lid features two functional air scoops. They’re not there to feed the engine, though, but to aid with downforce and reduce drag.

The engine bay hood is entirely opaque – no rear window, with carbon fiber replacing the glass. So, no rear-viewing from this car, and Alpine takes pride in claiming the driver won’t need to look back too often, as the A110 R is faster than its competition.

This performance is achieved thanks to aerodynamic improvement, with a better diffuser – made of carbon fiber and fiberglass – modified spoiler and side skirts. Also, a stiffer and lower body than the A110 S keeps the R on track. With 0.4 inches (10 mm) less ground clearance, the A110 R can further be lowered another 0.4” (10 mm) inches, thanks to 20-click ring-adjustable shocks.

The A110 R has three driving modes: Normal, for daily-driver-economy. Sport, for a boost of adrenaline; and Track. The former puts the seven-speed gearbox at the driver’s fingertips, with the paddle-shifter being the only gear-changing possibility. Also, the stability control is tweaked to push the car to its limits without making it lose its footing. Still, serious piston heads can turn off this setting and go full rapid fire on the track.

As for the interior, the unibody carbon fiber seats – 11 lb (5 kg) lighter than on the A110 S – and six-point safety belt keep the driver focused on one thing – hitting the apex at the perfect point for better track performance. Speaking of which, onboard monitoring from Alpine Telemetrics takes care of reading the car’s vitals in real-time: turbo pressure, gearbox temp, steering wheel angle, and G-forces. The chronograph will measure and record track figures.

The Brembo brakes, with 12.6-inch composite discs, help tame the A110 R, while Michelin Pilot Sport Cup 2 semi-slick tires (215/40 R18 at the front and 245/40 R18 at the rear) provide “an improvement of 0.5 seconds per km on the racetrack.” Price and availability dates are yet to be announced, so until then, you can only see the A110 R in the video below. 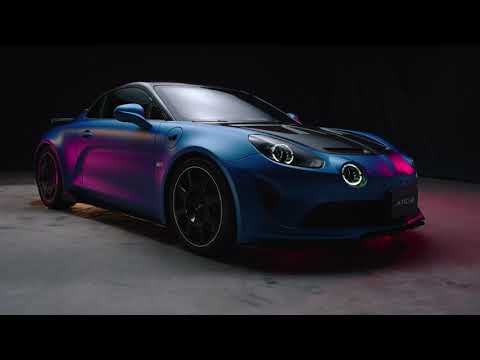