1 First-Year GTO Hides a Famous Engine Under the Hood

All-Original Pontiac LeMans Is Up for Grabs at No Reserve, Just Don't Pop the Hood

Born in the middle of the muscle-car era, the second generation of the Pontiac Tempest LeMans was aimed at those looking for more style and luxurious items than high-performance V8s under the hood, even though later on, the carmaker added the more powerful GTO version to it.
11 photos

General Motors was running the high tides in the mid-'60s and managed to make money from most of its cars. Thus, it introduced the second generation of the Tempest in 1964, and one of the trim levels was the LeMans. GM tried to make the same successful marketing strategy as with the Bel Air, where the Impala trim level ended up as a separate vehicle in 1959.

The car that you see here was produced in 1964 on the A-platform, and it is a metallic blue coupe. At first sight, it was difficult to understand whether it sports a new paintjob or not. However, considering it spent a lot of time in a museum, it might be original. Moreover, it has some scratches here and there and some touch-up paint chips.

But Pontiac offered the LeMans coupe with a choice of engines, starting with a mundane 215 cu-in (3.5-liter) inline-six and ending up in the GTO variety, with the mighty 389 three two-barrels that produced 358 hp (353 PS). But this example features the least powerful version of the LeMans lineup. Moreover, it is paired to a two-speed automatic transmission, so you can't expect to be a quarter-mile sensation.

Some might wonder if this car can do a burnout. However, it should be able to get a squeak out its new tires, especially since the engine looks pristine and the odometer shows just a mere 15,300 miles (24,600 km). Actually, the entire vehicle looks like it was either meticulously restored, or kept in a controlled environment, such as a museum. Oh, wait...

The cabin is fitted with tan vinyl upholstery, including lower-door carpeting. Worth noticing that everything on the car works as it should. After all, apart from the manufacturing year, it's almost a new vehicle. The Fp427 seller purchased the vehicle from a museum in November 2021, and, after they put a few hundred miles in it, they are selling it at no reserve. Sure, we might expect to see a bidding war toward the end of the auction, which will be on July 21st. Until then, you might book a trip to Hubbard, Ohio, and see this LeMans in person. At the end of the day, this car is about driving smoothly an All-American classic vehicle and enjoying the ride, not the performance. 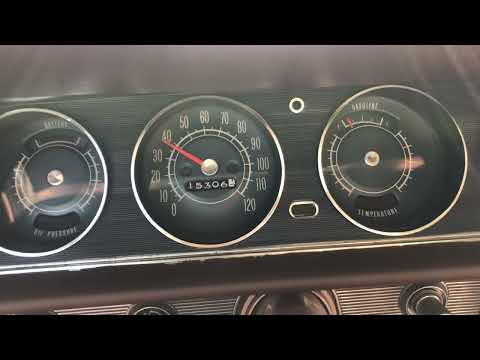