3 Luminosity Is One of the Greenest Superyachts Ever Built, Now Up for Sale

5 Project ICE Kite Brings Wind Power to Your Next Luxury Yacht
Car video reviews:
Up Next

Any one of us would probably buy a boat so we could sail around the world, but not the owner of All About U2. This gorgeous sailing boat (a motorsailer, in reality) was specifically designed so it could double as nightclub at anchor.

All About U2, a Gorgeous Sailing Boat Designed to Double as Nightclub at Anchor

And the good news is that it’s now for sale. Its first owner, who had it built according to very strict specifications, received delivery of it in June 2019, but he’s already made up his mind to build himself a bigger boat, so he’s selling this one.

Ironically, in what is perhaps a solid insight into how the mind of a billionaire works, this sailing boat is named after its predecessor, All About U. The same owner had it commissioned, took delivery and then sold it before even setting foot on it. U2 (with the “u” in “about” made to resemble a smiley face) is now facing the same fate but, truth be told, anyone would be lucky to have it – anyone with €14.9 million ($16.7 million) to spare.

Listed with Fraser Yachts, All About U2 stands out for its sleek, minimalist style and open, uncluttered spaces. Being imagined as a sailing nightclub, the entire fly deck is open, without stairs, which makes it ideal for hosting large parties and for encouraging socialization. These days, socialization is perhaps the last thing on our mind, but times will change. And this boat will come very in handy when they do.

“One of the owner’s key requests was to have every deck flat, on one level, without stairs to trip up on,” Bourgoignie says. “So, the main deck is all one level, then you go up to the flybridge and that’s on one level. The lower deck level includes the beach club.”

The 50-meter (164-foot) All About U2 is the second boat launched at ADA Yacht Works in Turkey in the summer of 2019. With a steel hull and an aluminum mast, it is powered by twin CAT C18 engines, but it can sail, should this be desired of it. Top speed is rated at 12 to 15 knots, and it has a 3,000 nautical mile range at a cruising speed of 10 knots.

It is ideal for charter, Georges Bourgoignie explains in the walkaround made available by Fraser Yachts, which is also available at the bottom of the page. With its massive, contemporary fly deck, it is also the perfect venue for throwing parties, whether at sea or at bay.

The 100-square-meter (1,076-square-feet) saloon includes anything from dining area and lounge, to the steering controls. The flydeck also comes with nightclub quality sound system (Bang & Olufsen), an open cooking space and a large bar.

An additional entertainment area is situated at the stern, where an extended swim platform creates the perfect beach club, connected to the rest of the ship – for guests to enjoy watersports, work on their tans or to continue partying. All About U2 comes with all the toys such party-loving seafarers could ever wish for, and a hydraulic lift to lower them onto the water.

Below deck are the accommodations: a full-beam master suite and a full-beam VIP room and four other staterooms, plus an additional dedicated massage room, of which Bourgoignie says are “quite nice.” Five spacious cabins for crew are also located there, as is a commercial-grade galley. In total, All About U2 can comfortably accommodate 14 guests and 10 crew.

Furnished in soft beiges and whites for a relaxing, chilled-out feel, (punctuated by splashes of orange), All About U2 stands out for being a beautifully-built and solid motorsailer that could be put to long-range use. However, because of its first owner, it will probably be remembered as the sailing boat that was never meant to sail in the first place. Or to sail as little as possible.

As the same Bourgoignie explains in a talk with The Robb Report, “The owner is a larger-than-life character. He loves yachts, he loves parties and All About U2 is his playtoy. He’s also not a sailor, but likes the sexy aesthetic of a sailboat.”

Which is a very delicate way of saying that the man built himself a boat because he loved the idea of having his own private nightclub on one. 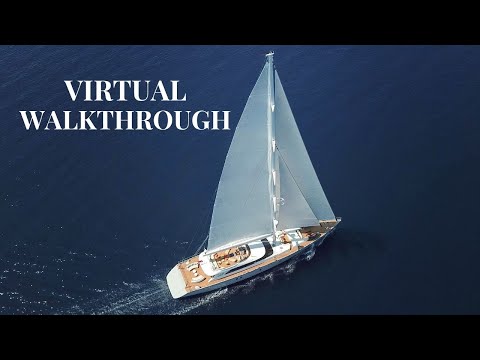