As car manufacturers are rushing to make the switch from using internal combustion engines to electric power, gearheads around the globe continue to push the limits of their gas-powered cars. These days, making 1,000 horsepower seems to be the goal for most of the folks in the community, and that translates to some really spectacular content for us to enjoy.
7 photos

The past decade or so has seen sort of a resurrection of the global rotary owners and enthusiasts community, as more and more people are turning their attention towards cars that make up the Mazda RX series, in one form or another.

This phenomenon has been accelerated by a few daring enthusiasts, who have decided to pour in years of hard work and God knows how much money into their beloved RX vehicles, be it that we're talking about people using these cars for drifting, time attack, hill climb or drag racing, or just hooning them on public roads.

Mazda never built a road-going four-rotor engine, but it did use one in the legendary 787B Group C car, which won the 24-hour race at Le Mans back in 1991. In fact, most Mazda rotary powered vehicles came with just two rotors, with the only exception being the Eunos Cosmo luxury coupe, which introduced the turbo triple rotor unit, also back in the 90s.

Aspiring rotary enthusiasts like Mad Mike, Rob Dahm, and David Mazzei - to name just a few - have all decided to pursue the idea of bringing a four-rotor engine into their cars. While Mad Mike has been playing around with such cars for the past decade or so, and Rob Dahm is just now finishing his build, this year David Mazzei also managed to complete his Formula7 project, after several years of intense work.

His car is a 1993 R1 RX-7, with a 26B Full Peripheral Port, four-rotor engine, and a 98mm Turbocharger that can deliver as much as 1,000 rear wheel horsepower given the right boost. The build also packs a pneumatically actuated six-speed straight-cut sequential dogbox.

For the purpose of this all-out test, held at Barber Motorsports Park Racetrack in Birmingham, Alabama, David handed over the keys to Bryan Longshot Leonard, who did an impressive job at pushing the car to its limits, all while managing to scare off the surrounding neighborhood with 110 dB of rotary madness. 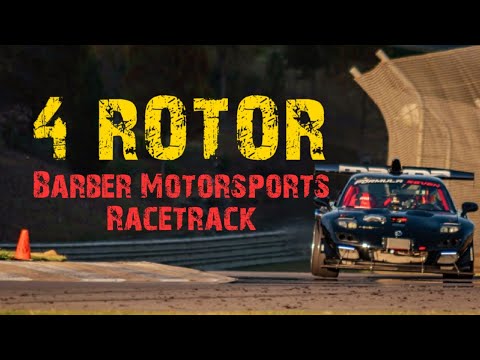