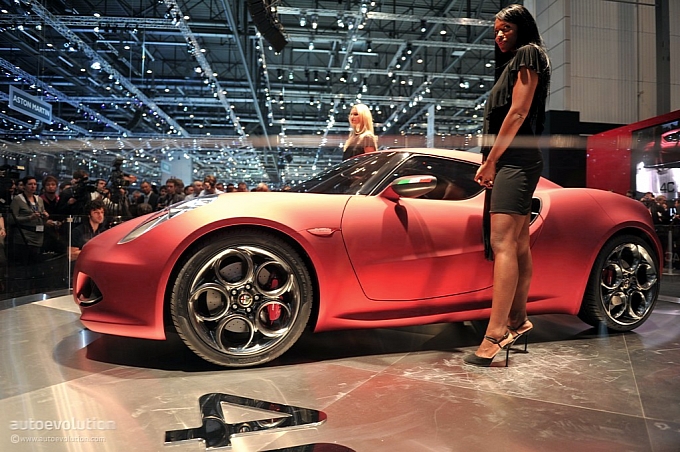 Alfa Romeo presented at the 2011 Geneva Auto Show last week the all-new 4C rear-wheel drive coupe and, according to sources from within the company, the car will be launched in the United States as well, in an effort to help the Italian brand relaunch in Chrysler's home market.

The 4C is predicted to arrive in the States sometimes in 2012, probably in the last months of the year, just after the MiTo and Giulietta.

The 4C "will bring us back into markets such as the United States, where we are not present today," Alfa CEO Harald Wester said last Tuesday on the sidelines of the Geneva Auto Show, according to a report by Automotive News Europe.

Alfa intends to produce between 15,000 and 20,000 units per year, the source added citing two unnamed persons from the Italian company. An additional 5,000 to 10,000 production lot will be developed for Abarth, but it appears that the special units will come in the form of a roadster.

Not much is known about the price, but it is believed that the 4C will wear a price tag of approximately 45,000 Euros (approximately $62,900 at the current exchange rate) on the Old Continent, while pricing will go in the same range in the United States.

The 4C comes with design cues from the 8C, including carbon and aluminum pats, as well as the rear-wheel drive system. It is powered by the 1750 Turbo Petrol engine that unleashes 200 horsepower and is already available on a number of models such as the Giulietta Quadrifoglio Verde. Performance figures are expected to be amazing, with the 0 to 100 km/h (62 mph) sprint to be done in under 5 seconds, while the maximum speed will be electronically-limited to 250 km/h (155 mph).