It's time to get reacquainted with the very same Camaro SS that we saw last week in a fight against a stock Shelby GT350. After stretching its legs against the Ford, the Bowtie-badged muscle car felt like accepting a challenge from an Alfa Romeo Giulia Quadrifoglio, a very different type of beast than that Shelby.
6 photos

Like the latter, the Alfa is also stock, but it happens to be powerful enough to make this race a very interesting one. The Giulia QV is powered by a 2.9-liter twin-turbocharged V6 engine, developed exclusively for the four-door saloon by Ferrari technicians. The engine is actually very similar to the V8 unit in the Ferrari California T, albeit with fewer cylinders.

Now the Chevy. According to the uploader, there’s a six-speed manual gearbox mated to its 6.2-liter LT1 V8 engine, which normally produces 455 hp (461 PS) and 455 lb-ft (617 Nm) of torque. However, this car also features an E85 mod and an optional drag racing package, which on paper can take you to 600 hp if you fit every single drag racing component available through Chevrolet Performance onto your LT1-powered Camaro.

That package, by the way, consists of a cold air intake race filter, American Racing headers, high-stall torque converter, multiple ZL1 spec components, and more. It stands to reason that if this Camaro is even better at getting off the line, then mid-range punch should be much improved too.

In the end, this turned out to be a really good fight, and we have to give props to the Alfa for hanging in there like a champ. 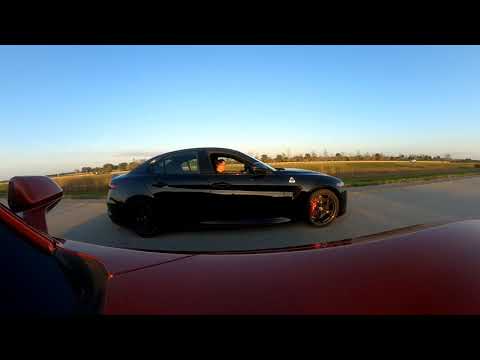