4 Devel 16 Production Model Is Finally Out, Has a V8 Instead of V16, Half-Baked Perhaps?

5 This $139 Million Mega-Mansion With Its Own Supercar Elevator and Display Is Insane
Car video reviews:
Up Next

Alex from Supercar Blondie visited Automobilzentrum Rhein-Neckar in Veirnheim, Germany, which stores a collection of cars worth over $50 million, with some of the most exclusive models in the world. And she even takes one to Burger King.
10 photos

Automobilzentrum Rhein-Neckar was created by Kevork and Omid, who are best friends from school. Their collection is ranked at millions of dollars and encompasses some of the most exclusive cars in automotive history.

At the beginning of the video, we see a semicircle of expensive supercars in front of the luxury dealership, mainly Italian, British, and German, strategically parked to get all the attention. Among them, there are several Ferraris, the 488 Pista, F8 Tributo, and SF90 Stradale, which was one of the most expensive models in the lot, estimated at around $550,000. Next to them are several McLarens, a 720S, not a regular one, but a Le Mans Edition, and a couple of 620Rs.

There is an “English court,” which features even more McLarens, and obviously, Rolls-Royces and Bentleys. We see a fully blacked-out Rolls-Royce Wraith, a brand-new gray Ghost, a Phantom, and a Phantom Coupé. In the same space, there are several Porsches, too, and the ultra-luxurious Mercedes-Maybach S-Class.

Behind the glass doors, there are the “super, super exclusive hypercars,” as Alex puts it. With over $25 million worth of automotive history, among them, we see a Ferrari LaFerrari and an Aperta, the 70th Anniversary, a Porsche 918, a McLaren Speedtail, a Bugatti Chiron Sport, a Veyron, and a Ford GT.

The luxury dealership also includes a workshop where you can wrap your car if you don’t like the colors available. There’s also an option to get a ceramic or a PPF coating.

At the end of the video, Omid challenges Alex to take the Bugatti Chiron Sport to Burger King Drive-Thru and make it out of there without scratching the wheels. Check the video below to see if she made it. 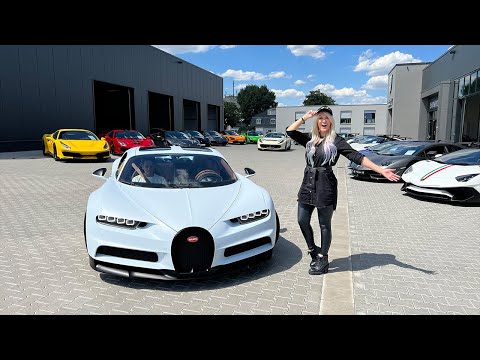