5 Tesla Owner Resells His Model X and Asks $80,800 More than He Paid for It
Coverstory

Home > News > U-turn
Vlad Mitrache
Wait a minute, how come he has four? He’s maybe got a Roadster, a Model S and, being an A-Lister, a Model X, but what’s the fourth? Did he get his hands on something we’re not allowed to yet?
1 photo
No, not at all. In fact, you got one more of the other three wrong as well, as he has two Model S cars and two Model Xs. You know, one of each for two different locations where he spends most of his time. What, you would do that too if you were an “international artist, superstar.”

For somebody - like myself - who didn’t know much about Akon before watching this clip, he really doesn’t come across as your typical hip-hop artist. Don’t get me wrong, I’m not that ignorant as to necessarily expect bling, guns and foul language, but you get to see how he managed to mix his music career with a business one.

He did spend a little fortune on cars, though. After becoming famous, he ended up having 28 of them, including Lamborghinis, Ferraris and even more unusual stuff like Spykers. However, all that belongs to the past now as the only vehicles that matter to him are his four Teslas. He’s so pumped, in fact, that he jokes about getting in touch with Elon Musk for a personalized model.

He does seem to have his judgment blurred a little as he calls the Tesla cars “light,” whereas the 2,175 kg (4,795 lbs) of a P85D Model S are anything but. The rest, though - torque, performances - he’s spot on. He sounds like he’s read the salesman’s brochure beforehand, listing all of the car’s key points in record time, so if his business doesn’t work out, he can always find work at a Tesla dealer. Oh, wait.

Just so you’ll like Akon even better, know that his love for Tesla isn’t just down to the car’s low noise levels or its phenomenal acceleration. Our man is also an ecologist, and one of his enterprises (called Akon Lighting Africa) is offering LED lighting to 15 African countries using solar power. That’s a man who gave up on an impressive car collection to drive four electric vehicles and who sees that those less fortunate aren’t left in the dark. Akon, my man, I couldn’t care less what kind of music you sing - you’re more than alright.

Here's the mini-interview given for CleanTechnica where he speaks about his love for Tesla. 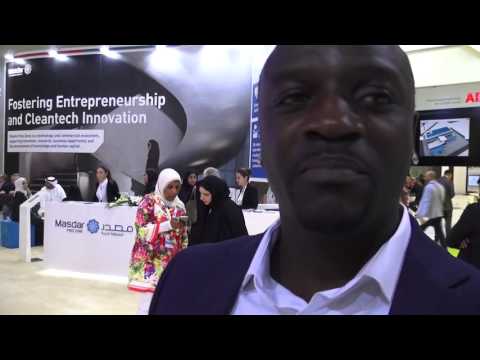