1 Here’s How They Get Airplane Munitions Ready on the USS Dwight D. Eisenhower

Futuristic 2023 Mitsubishi Lancer Evo XII Is Sadly Only a Rendering

It’s a very busy time for the pilots of the Carrier Air Wing 3 and the personnel serving on the USS Dwight D. Eisenhower (CVN 69) in the Arabian Sea. The carrier and its entire Strike Group are engaged in ensuring protection for American and allied troops currently withdrawing from Afghanistan.
9 photos

America is picking up the pace of the withdrawal (the military top brass doesn’t like that term, so they use drawdown instead) and plans to be out of the country far ahead of the initial target, which was September 11, 2021. That means a lot of activity is taking place at bases around the country and on the platforms sent to the area to support the withdrawal.

The Eisenhower is the main such platform doing this. It presently operates from the Arabian Sea together with five guided-missile destroyers and cruisers and the airplanes of the Carrier Air Wing 3 assigned to its deck.

In a video released last week by the U.S. Navy, we can see some of these planes in action, taking off and landing seemingly round the clock from and on the ship’s flight deck. Watching these images sure brought back memories of the time when we got to witness such scenes almost on a daily basis, as far back as the first war against Iraq—the Eisenhower was part of that war as well with its own carrier group, alongside one built around the USS Independence (now retired).

For the record, we are not being told how many airplanes are currently taking part in these operations. The carrier can hold up to 90 fixed-wing airplanes and helicopters, and the ones presently deployed include F/A-18F Super Hornets, E-2C Hawkeyes, EA-18G Growlers, C-2A Greyhounds, and Seahawk helicopters.

You can see most of these machines in action in the video available under this text. 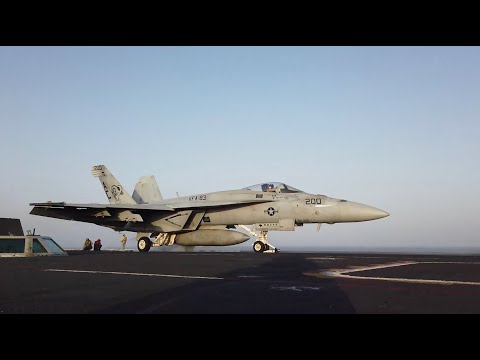