1 Can This DIY Guru Finally Get an Abandoned Airplane Started After 20 Years?

Airplane Gets Its First Wash in 17 Years, Tons of Elbow Grease Required for the Job

Just like vehicles, airplanes get dirty. Letting them sit for 17 years in an airfield's parking area is not going to make them shine, but pressurized water will help. The folks at Rebuild Rescue have decided to clean what they call Project Phoenix, an abandoned Cessna 401, as they move towards their goal of bringing it back to life.
6 photos

We have been following the saga of the abandoned Cessna ever since the DIY guru that is the main face of the channel first presented the airplane two months ago. From there, he managed to fill up its tires, ensure its engines can still turn over, and even started its turboprops.

Unfortunately, restoring an aircraft is an entirely different affair from doing the same with a car. You cannot just rebuild the engine yourself and then have a go at flying. It needs to be rebuilt by a technician who is certified to work on it, and the entire aircraft needs to be checked before it gets to be airworthy again.

That is why the folks over at Rebuild Rescue started a GoFundMe campaign, which already raised $178,560 of its $150,000 goal from over 8,000 donations. All the people who donated will have their names applied to the fuselage of the aircraft once it is completed, Rebuild Rescue promised.

The Cessna's next flight is still weeks away from becoming reality, as its interior will require a thorough cleaning. Who knows, maybe Larry Kosilla of AMMO NYC will notice what's going on and collaborate with Rebuild Rescue on this, as seventeen years out in the open will leave marks on anything. In the case of this Cessna, which had one of its windows open, the marks are easy to see, and can be smelled from a distance.

Yes, we are referring to bird droppings, which are inside the airplane, not just on its wings, windshield, and windows. The birds seem to have had their way with the cockpit, but you cannot say anything different about the engine compartment, either. 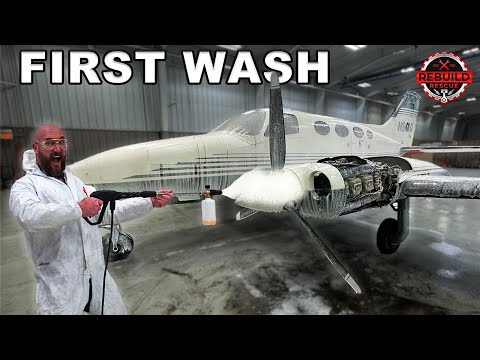