3 Chinese Villager Builds His Own Zeppelin, Proves It Can Fly

4 Weird Nazi Toys: Messerschmitt Me-163 Komet Is a Rocket Interceptor

5 China’s Modern Zeppelin Is a Solar-Powered Giant of the Skies That Travels Near Space
Car video reviews:
Up Next

Pedestrian Fast Lanes Are Being Considered, but Are They Really a Good Thing?

While big airliners have several safety features that were specially designed to prevent disasters from happening, smaller aircraft are often limited when it comes to such enhancements. It’s one of the reasons former Walmart CEO Bill Simon was involved in a near-death experience recently, when he was forced to land due to engine troubles. Luckily, he was flying a Cirrus SR22T.
1 photo
Simon was piloting his plane, heading from Bentonville, Arkansas to Waco, Texas, when he ran into engine trouble shortly after takeoff, CBS News reports. Since the small-sized aircraft was losing altitude, Simon had to find a quick solution so that nobody would get injured because of him, while saving himself as well.

“I’m going to need an all crash here. We’re going to try to find a place over here that’s clear,” Simon says in Air Traffic Control audio recordings, quoted by the source. What happened next was what made the video below turn viral. The single-engine plane deployed a parachute, glided to the ground and landed on a stretch of road. Aside from the fact that there were no victims, the entire aircraft remained almost intact.

The FAA and NTSB are investigating Tuesday’s incident, with further details about the technical problems to be unveiled soon. Lives have been saved, that is certain, and it’s thanks to an innovative system.

You see, the company based in Duluth, Minnesota, may be rather young, considering it was founded in 1984, but it does manufacture the world’s best-selling single-engine, four-seat aircraft since 2004.

One of the reasons it’s so popular is the same whole-plane emergency recovery parachute system - called the Cirrus Airframe Parachute System (CAPS) - that saved Simon's life. The SR22T was introduced as a new model in June 2010 and is equipped with a ground-boosted Continental TSIO-550-K producing 315 horsepower. Weighing in at 2,348 lbs (1,065 kgs), the aircraft's maximum cruise speed is 214 knots (396 km/h or 246 mph), while its top operating altitude is 25,000 ft (7,620 m). 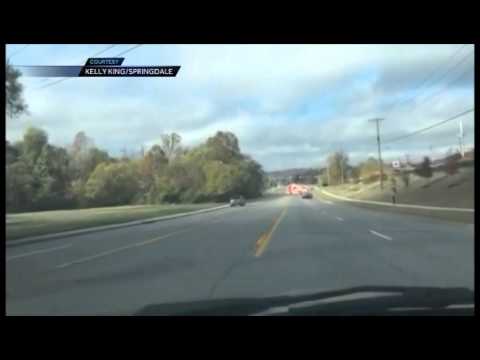