1 This Is the Airbus Helicopter with Aston Martin Wings

2 Aston Martin-Designed Airbus Helicopter to Be Unveiled in January

3 Say Goodbye to Traffic Jams From Your Flying Porsche

4 Austrian Airlines Is Flying Drones Around Planes for Maintenance

Home > News > U-turn
Elena Gorgan
Today’s commercial flights are not exactly the epitome of comfort. In fact, in recent years, seats have gotten narrower and legroom smaller, and there’s also the issue of the massive carbon footprint of each flight.
6 photos

A concept model from Airbus could solve both these issues, to completely revolutionize the industry. Called MAVERIC (Model Aircraft for Validation and Experimentation of Robust Innovative Controls), it uses a blended wing factor form to minimize the carbon footprint and maximize cabin space.

For the time being, MAVERIC is just a model. At 2 meters long and 3.2 meters wide, it looks like an oversize toy that can be operated by remote control, but a 10-strong team from a special departmetn within Airbus has the past 3 years working on it.

It may look like a toy, but it’s anything but: Airbus stresses that the demonstrator has undergone rigorous testing just like any other of its aircraft, including wind tunnel testing for aerodynamic characteristics, and low-speed and stall dynamics testing. In the future, it will be tested for handling qualities, flight control, multi-objective control surfaces and modularity, Airbus says in a press release.

MAVERIC completely alters the conventional tube-and-wing configuration of modern aircraft, and proposes a form factor that blends the cabin with the wings. The immediate effect of that is a 20 percent decrease in fuel consumption as compared to current single-aisle aircraft and more cabin space for extra comfort for all passengers.

Not only will passengers get extra legroom and more privacy with wider seats, but noise reduction could also be possible. The MAVERIC concept has a “shielded” engine mounted above the central body, as opposed to two engines on each wing. The innovative design would also work for alternative propulsion systems.

“At Airbus, we understand society expects more from us in terms of improving the environmental performance of our aircraft,” Adrien Bérard, MAVERIC Project Co-Leader, says. “MAVERIC’s blended wing body configuration is a potential game-changer in this respect, and we’re keen to push the technology to the limit.”

“Initially, many dismissed the MAVERIC project as merely a ‘hobby,’ or, in other words, a project Airbus wouldn’t learn very much from,” Bérard adds. “So we had to prove them wrong by showing that we could deliver a very sound basis for future aircraft configuration.”

MAVERIC first took to the skies (in utmost secrecy) in June 2019 in France, and was officially unveiled at the 2020 Singapore Air Show. 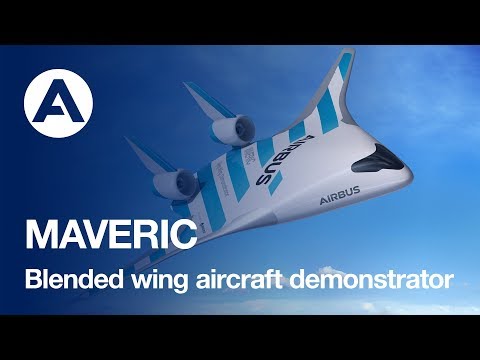