5 Porsche's eFuel Is Not for the Future: It Means to Keep the Past Running
Car video reviews:
Coverstory

Airseas, the maritime project of Airbus, used its aeronautical expertise to develop a state-of-the-art sailing system for commercial ships, which combines the traditional principles of sailing with the most advanced autonomous technology.
6 photos

Today’s shipping industry has the immense opportunity to leverage both the benefits of wind power as a source of clean energy and the benefits of the latest technology. In 2013, Vincent Bernatets from Airbus decided to implement the company’s expertise in the maritime sector. This is how Airseas was born, the company that created Seawing, a revolutionary system that combines automated flight control features from the aerospace industry with kite technology.

Airseas has big plans for Seawing, set to become the most competitive shipping propulsion system based on renewable energy. The startup hopes to implement it on 10% of the global fleet over the next decade.

One of the most innovative features of this sailing solution is its digital twin. The physical ship and kite are connected to a simulation model that recreates them. Through various sensors, the ship and its digital twin stay in permanent communication. Basically, all of the wing’s operations are controlled through this automated system.

The Seawing is capable of adjusting its position based on the wind’s direction and speed, for optimum performance. The wing management system also includes a route optimization algorithm, based on the weather forecast.

Another advantage of this technology is that it requires minimal space and doesn’t interfere with cargo operations, which means that it can be installed on any type of ship. According to Airseas, the innovative parafoil wing that’s capable of flying has ten times more traction power than traditional static sails.

The automated take-off, landing, and flight control of the wing, which is linked to a control pod via a cable, allows the smart, efficient use of this sailing technology.

The company has been working on this concept for years and recently got to the next level, by installing Sailwing on a commercial vessel, an Airbus ship, for the first time. This is just the beginning for Sailwing, a smart solution claiming it will cut 20% of CO2 emissions. 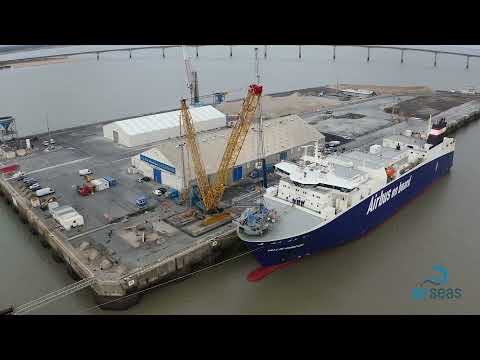