You’d think a MiG fighter jet slowly making its way across the tarmac would be a pretty unmissable sight if you’re driving, but not for this drunk dude. An Air Force officer, no less.
6 photos

A very strange drunk-driving accident took place at the Vasylkiv Air Base near Kiev, Ukraine, and it was only made public after photos of it made their way on social media. Earlier this week, a Volkswagen Touran crashed into a MiG 29 fighter jet that was being towed into storage, and a fire resulted that reportedly totaled the aircraft.

The MiG 29, also known as Fulcrum under its NATO nomenclature, is a twin-engine jet fighter aircraft designed by Mikoyan in the ‘70s. The Ukrainian Air Force has some 35 of these aircraft, some of which, like this particular one, were overhauled in 2017.

The Vasylkiv Air Base is home to the 40th Tactical Aviation Brigade and the Air Command Central headquarters. The official statement on the crash, which you will find available below, doesn’t mention the rank of the officer responsible for it or, for that matter, the name. But it does make one thing clear: the man was under the influence of alcohol when he got behind the wheel of a Volkswagen Touran, his personal vehicle, and drove across the tarmac.

He hit the jet in the rear, as it was being towed into storage. There was no one on board the plane, but the driver of the VW received injuries to the chest and face. He is in stable condition. A fire started, which, despite the quick intervention of first responders, is believed to have totaled the jet.

Two separate investigations are now underway, local reports note: one by the Air Force and a criminal investigation, launched after it was learned that the officer was drunk.

Drunk-driving is always a serious, potentially fatal offense, but for a member of the Air Force to do it – and wreck a $5 million jet (the MiG 29 is valued at $20 million new) in the process – that adds a whole new layer of reckless. 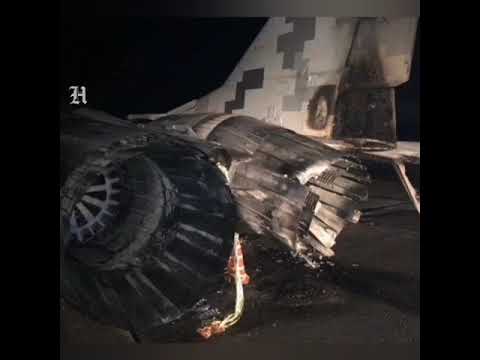