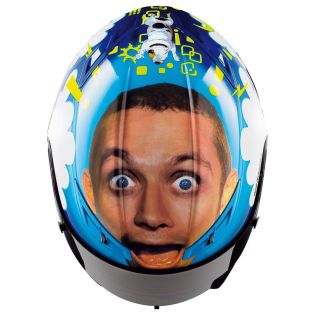 The 2008 Moto GP World Champion Valentino Rossi has always had the most original helmets. At almost every race, Il Dottore showed his fun side by doing amazing wheelies, burnouts and giving free rides to his fans.

As Hell For Leather found out, Italian helmet manufacturer AGV has jut launched a limited edition replica of the helmet that Valentino Rossi wore at Mugello. The helmet is based on the GP-Tech range with the carbon/Kevlar shell and it uses all of the safety features as Rossi's helmet.

The Rossi helmet replica is fitted with fully washable and removable inside padding (including neckroll), with anti-scratch and anti fog polycarbonate Race X visor with tear-off system. The shield mechanism is XQRS (Extra Quick Release System) which ensures the shield's replacement without tools in few seconds. The available sizes for the helmet, which also benefits from an IVS (Integrated Ventilation System) with channels hollowed directly in the shell,  are XXS/XS/S/M/L/XL/XXL/XXXL.

Italian motorcycle racer Valentino Rossi won seven World Championships in Grand Prix racing by the time he was 26 years old, making his name as one of the sport's legends. Rossi is the son of the 1970's racer Graziano Rossi.

Valentio Rossi is probably the most loved rider on the Moto GP racing grid. Establishing record after record, perfecting his times with every lap and proving that he can win even with a disadvantage, Rossi has and will be an inspiration for past and future generations to come.