1 Rivian Mobile Service Now Has Special R1Ts and EDVs, RJ Scaringe Gives Us a Look at Them

2 People Have Fun Driving Through a Puddle, the Police Turn Up

5 A Puddle, a Tesla Model S, and the Summon Function Add Up to a Lot of Happiness
Up Next

"Adventure Truck" Rivian R1T Gets Damaged by Driving Through a Puddle

Home > News > Car Profile
Cristian Agatie
Rivian markets the R1T pickup truck as an “adventure vehicle” that can withstand the harshness of occasional off-road trips. Despite that, one unlucky owner had to set a service appointment to install an underbody panel after driving through a puddle.
6 photos

Rivian is proud of the adventure EVs it builds under the R1 line. The R1T was the first electric pickup truck on the market, so many people wanted to know if it was good for anything other than cruising around town. We’ve seen many videos showing that the Rivian R1T can do some heavy lifting, whether working as a farm truck or taking a fun trip on the trails in Moab. Nevertheless, depending on the situation, your mileage might vary.

YouTuber Branden Flash, who owns a Rivian R1T, learned this the hard way after driving through a puddle. He wasn’t even trying anything extreme at the time, just casually driving on his way to work in Charlotte, NC, on a paved road, mind you. If we’re to believe what he says, the puddle was nothing extreme, maybe three-four inches deep, certainly nothing that a Rivian R1T could not handle. But it was enough to rip off the truck’s rearmost underbody panel.

We know from previous similar events that puddles can be harsh on a car, depending on the speed. In several cases, Tesla cars lost the rear bumpers when driving through a puddle until Tesla decided to change the way they are fastened to the car. Unlike ICE vehicles, EVs have paneling underneath to help with aerodynamics, which is their weak spot when going through pooling water at high speeds. Unfortunately, Rivian is a new manufacturer and is still trying to overcome teething problems, so Branden’s truck had to suffer.

The YouTuber did not stop to check what happened and only got to look underneath after he got to work. The underbody panel in the rear was completely gone, so he figured he might still find it on the road back home. He did, but it was in such a bad condition that it was useless, probably because many vehicles drove over it. He then contacted Rivian Service to have his truck checked and possibly fixed. Although a mobile technician came a couple of days later, there wasn’t much they could do because the truck needed a thorough inspection.

Branden is unlucky because he lives in North Carolina, where Rivian is prohibited from setting up service centers unless through a dealership. The closest Rivian service center was in Atlanta, five hours of driving away. That was the biggest inconvenience, but luckily, everything went smoothly after that. He got a loaner R1T until his truck was repaired, and everything was done under goodwill, although the panel mishap was clearly Branden’s fault.

He also checked other things that seemed weird, but everything turned out to be “within specs,” as the service technicians mentioned. There were other small issues that needed mending, and they were also fixed for free. Overall, Branden’s experience with the Rivian service center was positive. Check out the video below to see how it all went. 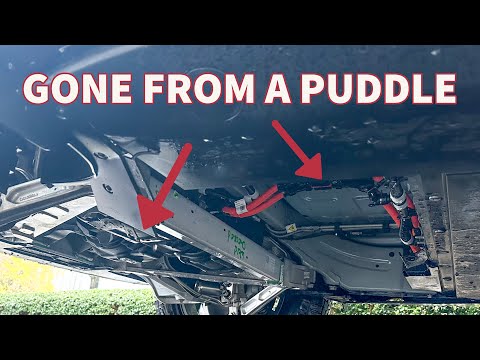