Form Truck Bed Camper Fits Nearly Any Pickup on the Market, Including Tesla

Dragos Chitulescu
Taking a bunch of SUVs out for a drag race is a bit like testing how many grocery bags you can fit in some supercars. Of course, you can go ahead and do it, but it doesn't necessarily make sense. There are a lot of fast SUVs on the market right now, and even more that are packing more than 300 horsepower. But let's not forget the weight factor.
9 photos

Today we're looking at a drag race between a 2022 Genesis GV70, an Audi SQ5, and an Acura RDX. Right off the bat, you can see that the Acura is at a disadvantage, as it has the least potent engine here. We're looking at a turbocharged 2.0-liter unit with 4 cylinders, that normally has 272 horsepower and 280 lb-ft (380 Nm) of torque. But this RDX has been fiddled with and is now rated for 314 horsepower and 340 lb-ft (461 Nm) of torque.

The Acura only weighs 4,026 lbs (1,826 kg), while the Audi sits at around 4,288 lbs (1,945 kg). The RDX is also the cheapest car here, and it doesn't look like it stands a chance against its competitors. For the first run, the SQ5 is off to a terrible start. The GV70 just rockets into the lead, proving that even with the extra weight, it's still quite fast. For the second run, the Audi is off to a better start, but it still can't match the pace of the Genesis.

The Acura, as expected, is the slowest car here yet again. For the third run, the SQ5 takes control of the race from the beginning. The GV70 downshifts instead of upshifting about halfway into the race so it immediately falls behind. This looks like a pretty strange incident and it's most likely down to a driver error. The fourth and last run reveals the winner of this challenge, and it's most certainly not the Acura. The SQ5 did OK, but ultimately the GV70 was too big of an obstacle in its way. 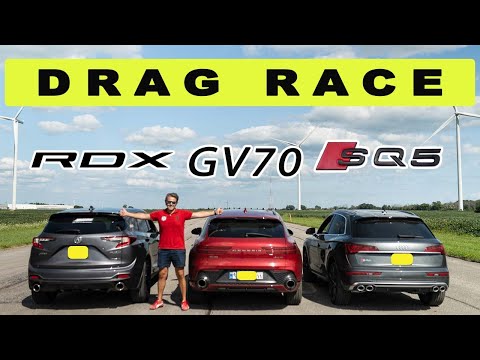