Home > News > Videogames
19 May 2022, 22:11 UTC ·
by Cosmin Vasile
Top Gun: Maverick, the sequel to the legendary blockbuster from the 80s, has been in the news quite a lot since we’re very close to its release in theaters. What’s really interesting is that multiple games have had crossover collaborations with the movie to bring one of the most iconic fighter jets, the F-14A Tomcat, to their players.
6 photos

Bandai Namco revealed back in February that Ace Combat 7: Skies Unknown will be getting a similar DLC but didn’t exactly say when it will arrive. Today, the Japanese developer finally confirmed that the Top Gun: Maverick DLC will release on May 26, the day before the movie releases in theaters.

As expected, the upcoming DLC will add the F/A-18E Super Hornet and the F-14A Tomcat from the original Top Gun movie. Themed emblems will be included in the DLC, too, along with the “Top Gun Anthem” music rearranged by Ace Combat composer Keiki Kobayashi.

The Top Gun: Maverick DLC will release at the same time on PC (via Steam), PlayStation 4, and Xbox One, but no information about the price has been revealed yet. On the bright side, we have a full trailer that shows off both fighter jets in action, so you can now feast your eyes on these legendary aircraft before being able to pilot them.

Finally, Bandai Namco confirmed that the Top Gun: Maverick DLC will not add any new story, missions, or maps to the game, so it’s just the new fighter jets, the emblems, and the music that will be included in the upcoming new piece of content. 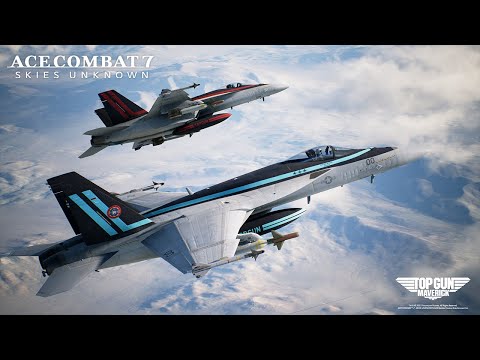