5 This 2005 BMW M3 E46 Is a CSL Tribute Done Properly With North American Flavor
Car video reviews:
Up Next

One of the Most Ostentatious Batmobile Replicas Wants a New Owner

Over the years, we have come to expect renowned tuning specialists to get involved in the VDAT (Association of German Automobile Tuners) and the Federal Ministry of Transport and Digital Infrastructure's "Tune It! Safe!" campaign. For the sixth time, AC Schnitzer doesn’t disappoint, presenting a thoroughly modified BMW M850i Coupe as the latest police car to promote safe tuning practices.
44 photos

We have seen enough of the aftermarket scene – both the official and the underground one – to know that tuning has two facets. The positive side usually makes the hearts pump faster, while the dark one includes law enforcement complaints... or worse.

The Tune It! Safe! campaign has become a staple of the German automotive industry already, and every year we’re eagerly awaiting to see what sponsors have prepared. For 2020, AC Schnitzer is getting involved for the sixth time, alongside other partner companies including Hankook, Foliatec, or Hella.

Best of all, German police attire aside, AC Schnitzer promises that every accessory and component fitted to the M850i can be had from the company - yes, even that tacky AC Schnitzer illuminated badge (which is still less intrusive than BMW’s own 4 Series snout).

The parts are also approved and fully homologated by licensing authorities, so customers will have all the usual warranties derived from professional work done by experienced craftspeople.

As far as the modifications are concerned, AC Schnitzer takes the M850i from 530 PS (523 hp) to 620 PS (611 hp), and doesn’t leave a stone unturned as customers can even have enhanced engine optics if they want.

The soundtrack department is taken care by the sports exhaust (with flaps) featuring double “Carbon Sport” tailpipes, while the Bavarian coupe also adopts a lowered stance thanks to a Nürburgring-tested suspension spring kit.

Rounding off the exterior appearance are the 21-inch matte anthracite AC3 Flowforming alloys and the bevy of aerodynamic elements made from carbon fiber, which are both spectacular and contributors to “significantly optimized downforce values.” Meanwhile, the interior modifications are a tad subtler, and this time around they focus on an aluminum-enhanced sporty atmosphere. 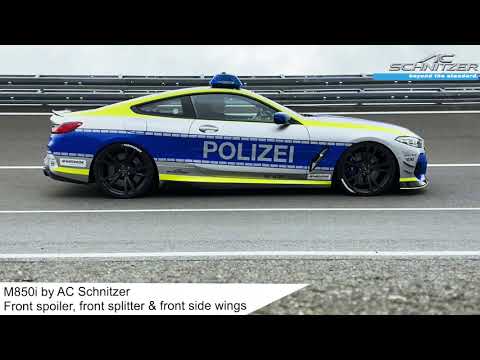