4 Can’t use Your Yamaha in the Winter? Abarth Has the Perfect Alternative

5 Fiat Abarth 131 Rally Tribute Is a Great Homage to an Overlooked Legend
Car video reviews:
Up Next

Call the Abarth 500 a "Fiat 500 Abarth" in the presence of a Stellantis official and prepare to get corrected. Write it in a car magazine article and you're going to get a not-so-pleasant phone from the brand's PR manager that will make you remember not to make the same mistake again.
7 photos

It happened to a friend (really, it's not just a euphemism for "it happened to me but I'm not comfortable admitting it"), and even as an outside witness, it was enough to have it engrained in my memory so that every time I see someone say Fiat 500 Abarth (which, funnily enough, is how it's listed on our website too), I immediately start to shake my head in disapproval. I wish I could stop but I'm still shaking it right now, which is making writing this more difficult than it should be.

The Abarth 500 is a funny little machine, and you'll notice I said "funny" not "fun". With its 1.4-liter four-cylinder turbocharged engine making 160 hp, it's not particularly fast despite its diminutive size, but perhaps the worst thing about it is its clutch pedal. There's only room on it for the tips of your toes, and when you push it, it has the weirdest of travels. That makes the five speeds of its manual gearbox a Godsent since it means you have fewer reasons to use the pedal.

The Ford Fiesta ST, on the other hand, has always been of the stand-out hot hatches in its class, with Ford proving it can make a very engaging chassis even for cars with moderate amounts of power. Since this is a 2014 Fiesta ST (the Abarth is one year older), we're looking at a 1.6-liter turbocharged four-cylinder engine putting out around 180 hp, but as we said, with Ford hot hatches, it's all about the chassis and handling.

Well, that doesn't count for much in a drag race, but the extra 20-odd horsepower apparently does. The two drivers are still learning about the cars (which they bought for approximately $8,000 each in a Top Gear-style challenge), which means we end up with varying results from both of them. However, over three different races, the common denominator was the Fiesta winning all of them - well, those that counted. However, comparing their two best results, shows the performance levels are basically identical since it's only 0.01 seconds in it.

The rolling race, however, shows the little Ford's obvious superiority over the even littler Abarth, and that's a theme that will carry over through the rest of the challenges (brake test and lap time). So, what can we learn here? Well, first off, if you're in the market for a cheap(ish) used hot hatch, take a Fiesta ST over an Abarth 500, but the most important takeaway is the fact you can have serious amounts of fun with seriously affordable cars. Oh, and always remember to call it an "Abarth 500" - you'll earn karma points for making a lot of Fiat PRs happy. 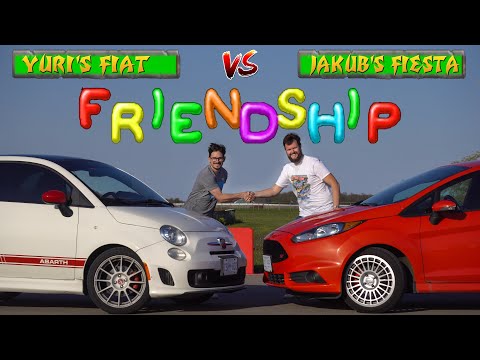