2 The Lamborghini Urus Is Dead, Long Live the New Urus S With Its Devilish 666 HP

5 The Last N/A V12 Lamborghini Aventador Is Going to Switzerland, It Is the End of an Era
Up Next

Abandoned Murcielago With No Engine Has Been Gathering Dust, Is Still Someone's Dream Car

Alexandru Boghiu
The V12 legend that is the Murciélago (“bat” in Spanish) made its first appearance at the Frankfurt Motor Show in September 2001. A successor to the Diablo, its 6.2-liter put out 572 hp (580 ps), which was pretty insane at the time, and is nothing to sneeze at even today. A total of 4,099 units were produced between 2001 and 2011, out of which one was driven by Bruce Wayne himself…
8 photos

When you buy yourself a Lamborghini, ideally you want it to be in good condition. Not the case for one particular Leicester fellow, who ended up buying one that’s seen some better days.

This green 2002 Murciélago has many problems and missing components. It’s been frozen in time for seven years, gathering dust, and definitely needs a lot of work – but Mat Armstrong isn’t afraid of a challenge.

The car ended up at an indefinite “pit stop” because of a chain rattle; the mechanic who was working on the issue left the company which owned the car, and the problem was never fixed.

Hence, the V12-powered Lambo has no actual V12 in the back, and many other parts are also missing (such as the gated shifter, the instrument cluster, and many bits and pieces from all over the place). Not to mention the car’s body wrap is peeling away, and the 18-inch alloy wheels are all cracked up, probably due to prolonged heat exposure.

The good news is that the missing components are lying around in crates and boxes, but figuring out what works and what doesn’t, then which one goes where, is going to take a while. Add to that the potential of additional costs for spare parts, on top of the already-high asking price for the car, and this whole project could turn into a money pit in no time flat.

You can take a glimpse at the Lambo and watch Mat start working on it by checking out the video below. 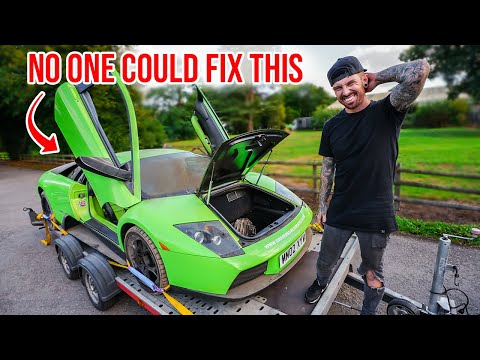