Home > News > Tuning
Aurel Niculescu
Many folks would consider the V10-toting Audi R8 and Lamborghini Huracan as good, albeit entry-level, steps into the fabled world of supercars. But aftermarket experts are just around the corner, ready and willing to morph these vehicles into veritable street-legal velocity monsters.
29 photos

So far, we have seen a fair share of powerful rides go through POV reviews and Autobahn top speed run presentations by the European AutoTopNL channel on YouTube, including a tuned 750-hp Audi RS7 or a stock (but still rumbling) Shelby GT350.

That means they’re not biased towards which side of the ‘Pond their vehicles come from, as long as they find a barren and unrestricted stretch of the Autobahn to put them through their paces. On this occasion, they did more than wait for the perfect moment to find lighter-than usual traffic on the well-known German highway.

It’s because they have a special guest – one that was brought with some outside help, so the action actually kicks off at the 1:11 mark, after a word on behalf of the sponsor.

It’s a Lamborghini Huracan Performante by HK Motorsport, an Italian thoroughbred that got supercharged from its usual 640 PS (630 hp) setup to no less than 851 PS (839 hp) with some help from California-based VF Engineering.

By the way, we know the exact pony count comes from official sources – we even get to see the ISR-Racing dyno spreadsheet. That’s before the real action begins, from the 6:35 mark.

Although we’re fully expecting to see the Autobahn section of the review (which kicks off at the 9:22 mark), let us dwell for a little longer in the walkaround location because the guys also had an abandoned airport all for themselves (there’s also a Golf 8 GTI running around).

Naturally, they also didn’t miss out on the Autobahn acceleration runs either, and we can check out how fast the odometer rushes past the 200 and the 300 kph (124 and 186 mph) marks as well. In the name of tradition, obviously. 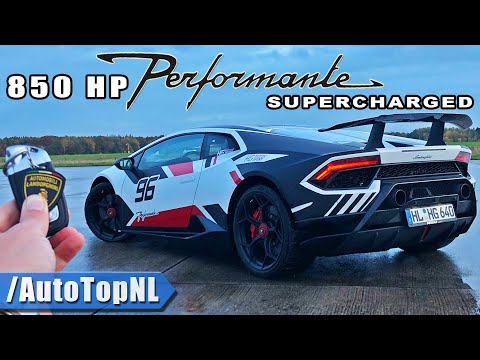