4 Turbocharged Cessna Skylane Goes Back in Production, Deliveries Start in 2023

Abandoned Airplane Gets Detailed by an Expert, Two Days of Work Are Worth It

Usually, barn finds refer to vehicles, and some of them are not always found in barns. But what about a “barn find” airplane? Well, that is also a possibility, and Jason of Rebuild Rescue has such a thing. You have seen this 1969 Cessna 401 before, but this time you get to see it get detailed.
7 photos

The airplane in question had been sitting outside for at least a decade, and the worst part about it was that it had an open window, which left it open for birds to enter at will. As you can observe, this led to an unwanted transformation from Cessna to Cesspool.

As Larry Kosilla of AMMO NYC, the detailer who took care of the job as a favor for Jason, bird droppings and rat droppings are extremely dangerous for human health, not just for vehicles, so it is best to wear gloves, professional face masks, and other personal protection equipment.

Just like in most of his videos, Larry walks us through the challenges of detailing this aircraft, which are similar to vehicles up to a point. Even after so many years left unused, this Cessna 401 is still worth a pretty penny if it is working, which is something that Jason will document on his channel, Rebuild Rescue.

We will continue to cover the most important parts of the project as it moves along, as we have accustomed you. This is an interesting story about a man and a free airplane, and we cannot wait to see this 401 Phoenix rise from the ashes of its former self.

With this collaboration, Larry also got to showcase the latest product he launched through his company, AMMO NYC, which is Restor. The latter is an EPA-registered product that is meant to disinfect, sanitize, and deodorize soft and hard surfaces, and it was imagined from the start to be able to work with vehicles without damaging them. 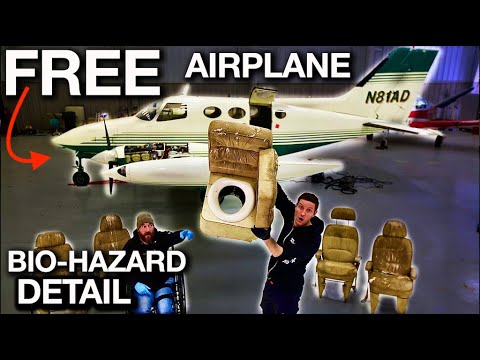