3 Rare 1951 Mercury M6 Truck Leaves the Barn After 50 Years, It's a Fabulous Survivor

Alexandru Boghiu
This 1969 Ford F100 was frozen in time and stuck in the dirt, not forgotten but neither cared for, reportedly sitting in a backyard for some 30 years. The owner got it from his father and was planning to start working on it, but life got in the way and he never managed to. So he sold it to someone up for the challenge.
10 photos

The wheels had to be dug out, and the brakes were all locked up. But eventually, the truck was put up on a platform and moved away. It didn’t look too good under the hood, which was to be expected, but most of the wiring seemed to be in decent shape.

The engine sounded promising. It was turning and trying to run, but the spark plugs weren’t looking too good, so they were cleaned up. Still no luck after that. The problem ended up being a bad wire, and once addressed, the fuel pump needed some attention. But many tries later, the sound of victory was loud and clear – the engine was running.

However, the truck was sitting on broken wheels with locked brakes, so fixing those was imperative if this Ford F100 were to run the streets again. While replacing the wheels, it turned out the new ones weren’t exactly right; they were touching the rear fender wells, so a couple spacers were required.

As for the brakes, the front ones unlocked when the truck was unloaded from the platform, but it was going to take some work to fix the ones in the back. While trying to do so, the clutch disk decided it has had enough and broke.

Ultimately, with new brakes, a new clutch disk, and a fresh set of wheels, the truck ended up decent-looking and functional. And after a good wash, it was back on the road. Watch the video below to see how it turned out. 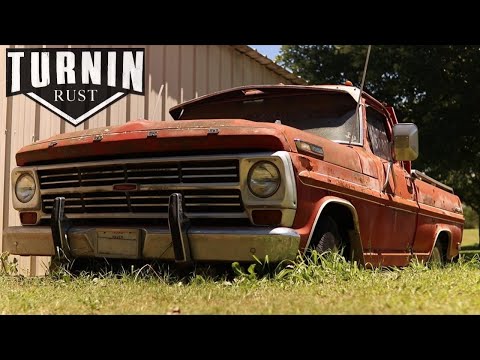