2 1968 Chevrolet El Camino Comes Out of Arizona Desert, Born With a Small Block

Alexandru Boghiu
The first generation of the Chevy El Camino was only produced for two years, from 1959 to 1960, when orders plummeted and it was discontinued.
8 photos

It may not look like it, but this “Hulk” Camino has the soul and body of a 1959 Chevy El Camino. The current owner found it behind a garage, bought it, and started working on it the next day, turning it into a combination between a hot rod and a rat rod.

The body has been chopped and modified, but the metal sheets on it are all the original ones. The front fenders and hood were heavily reshaped, while the roof has been moved back and kind of turned into a T-top. Moreover, the 6 feet bed (make that an 8 with the tailgate down) shrank down to just 2 feet, and the door handles are there just for looks, since the driver has to climb over the sides to get inside.

Once there, the interior isn’t the most spacious. It features bomber seats with 5-point safety harnesses, the original dashboard, custom gauges, and something you won’t see every day – the shifter has been placed on the underside of the roof to make the most use of the available space.

Overall, the car looks so different than what it started out as, that even other 1959 El Camino owners will have trouble figuring out what it is. It even has a special name besides the “Hulk,” and you can check it in more detail by watching the video below. 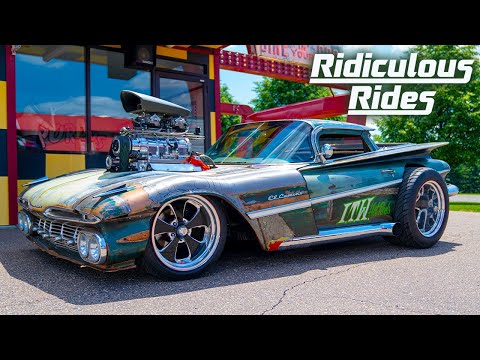