1 Marcel Is a Cute, Duck-Shaped Tour Bus That Also Floats, Packed With Tourists

3 Prince Harry Is a Member of a Secret Airport Service, The Private Suite

5 Parrrty in This “Masterpiece” School Bus Turned Into Pirate Ship
Car video reviews:
Up Next

We’re living very strange and very difficult times and, no, for once, this isn’t about the ongoing international health crisis. Our modern lifestyle is stressful and incredibly busy, so much so that many of us don’t even have the time to catch some proper sleep.
14 photos

For those in this particular situation and willing to pay to have the problem solved, there is now a tour bus for the sleep-deprived. It’s called the Sleeping Bus Tour from ulu travel in Hong Kong, but we might as well call it the Snooze Bus because that’s what it is: a tour bus designed to lull passengers into a resting sleep. You pay to be driven around as you sleep.

The idea of snoozing on public transport or, for that matter, in any moving vehicle (as long as you’re not in the driver seat, of course) isn’t unheard of. Some call it a coping mechanism, because the commute feels shorter if you just doze off; others see it as a chance to catch up on lost sleep. It’s for those in the latter category that this bus tour was invented.

The AP reports that tickets cost between $13 and $51 per person, depending on where you choose to be seated on the double-decker. The journey itself is a five-hour trip around Hong Kong and includes stops at Instagrammable locations, so you could be doing some sight-seeing as well, granted you’re awake for it. The ticket price includes a small goodie bag with an eye mask and ear plugs, and throughout the ride, you’re guaranteed no interruptions or noise. So this is better than sleeping on public transport, albeit more expensive.

Announced in September, the first outing of the Sleeping Bus Tour was sold-out, with passengers even bringing their own comfort blankets and pillows. Apparently, people are so stressed about everything happening in their life that they can’t sleep well at night, but have no trouble resting while traveling. This should answer the question probably forming in your mind: if you have five hours to ride the bus, why not just lie down in your own bed to sleep? 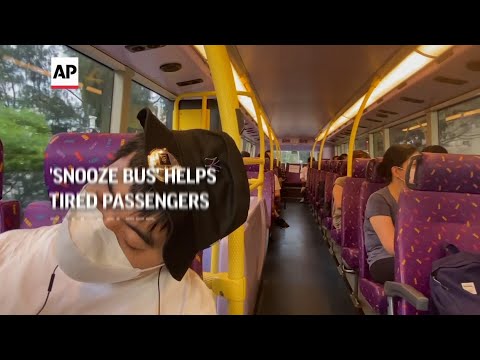