3 Tour the Amazing Galpin Car Collection From Home, With Beau Boeckmann as Guide

5 Riding With the King: What Cars Did Elvis Have in His Garage?
Car video reviews:
Coverstory

A Short Story of the Most Valuable BMW 507 in the World: Elvis Presley’s

If there’s one thing Elvis Presley, aka The King, loved more than music, his fans and rhinestones, it was fast cars and motorcycles. OK, make that two things.
50 photos

With international stardom and a seemingly never-ending cash flow, Elvis would often buy cars on a whim, either as a treat to himself or any one of his many associates and hangers-on. The upside to this is that there are many cars and bikes out there that have, at one point in life, been touched by the King. The downside is that it makes it hard to keep track of all of them.

That said, perhaps the most famous Elvis car is the 1957 feather white BMW 507, currently known as the most valuable, most beautiful and most famous 507 in the world. Believed to be worth an estimated $9 million, that 507 is the topic of the latest episode of Barcroft Cars’ Ridiculous Rides episode, which you can see for yourself in full below.

Elvis bought the car while stationed in Germany as a U.S. Army Sergeant from a race driver, in what was perhaps one of the first whimsical buys in his life. He came back to the U.S. with it and it still had the original white paintjob, but his female fans would often scribble messages in lipstick on it or even plant kisses on it, so keeping it clean drove the King mad. He asked that it be repainted red.

When he grew bored with it, Elvis sold the car to a race driver and it went completely off the radar until 2014, when collector Jack Castor bought it. Automotive journalist Jakie Jouret would trace the Elvis 507 back to the one Castor owned but had no idea about, so Castor eventually decided to send it back to BMW, free of charge, for a full restoration.

Right now, the Elvis 507 is back home and sits at the BMW Museum in Munich. It’s been given a complete restoration and has been returned to the original paintjob. Needless to say, no one is now planting lipstick kisses on it, though it remains as incredibly beautiful as it was back in the day. 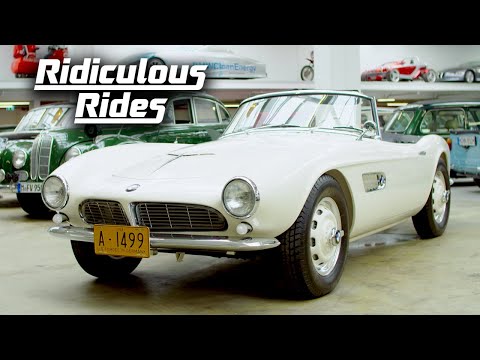