1 These Are the Most Expensive Porsches Ever Sold at Auction

4 Koenig C62: An Insanely Rare Street-Legal Supercar Based on a Legendary Porsche

Elena Gorgan
At the end of the day, nothing you can say will change a person’s mind, if they’re set on not changing. The same goes for a wider adoption of electric vehicles: no amount of talking and demonstration will do, if car owners don’t want to make the switch from fossil-reliant fuels.
34 photos

Porsche, already a multiple Guinness World Record holder for its electric vehicles, has now added another notch on its belt: the greatest altitude change in an electric car. That car is a completely stock Porsche Taycan 4S Cross Turismo, with three groups of drivers coordinated by self-titled “travel addict,” film producer and director, J.F. Musial.

The journey, as beautifully documented in the Porsche film at the bottom of the page, started at Eagle Mine in Michigan, a high-grade nickel and copper mine that is the only one in the country to allow a car to be driven into the tunnels. Normally, access to the tunnels is reserved for industrial machines, but the Taycan Cross Turismo met the criteria in factory spec, so it could get in. In this part of the challenge, Porsche coordinated with the miners on the ground, one of whom left us with this gem of a one-liner, “I don’t take selfies often, but when I do, it’s with a Porsche underground.”

The only stops for the drivers were to recharge, both the Taycan and the team members. The only team member to be in the car for the entire duration of the journey was Musial himself, while Dai Yoshihara, class winner at the 2020 Pikes Peak International Hill Climb, was the designated driver for the last part of the journey. It would also prove the most stressful, with a snowstorm closing in and a 45-minute window available to get to the summit before it closed down.

Speaking to Porsche, Musial says that whole thing started as a “what if?”-type of thing, and soon became one of the most thrilling adventures of his life. It was an exhausting one, too, because, in the same breath in which he thanks the mountain for allowing them to set the record, he announces plans to “sleep for a week.”

Porsche says that sealed GPS devices monitoring the route and altitude, an analogue altimeter and witness logs were fitted inside the Taycan, in order to meet the Guinness criteria. Guinness has officially ratified the new record, making the Taycan the only EV to have traveled continuously three miles in altitude, from below sea level up above the clouds. Reach for the sky, and all that. 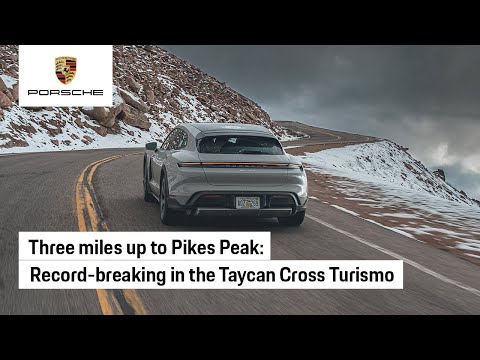