5 Ford Trademarks the Skyline Name in the US, Nissan Probably Not Happy
Car video reviews:
Up Next

This Jetboat built in New Zealand uses a Nissan Skyline GT-R motor to cruise the most lovely waterways you’re likely to see any time soon.
9 photos

While it definitely flies under the radar in terms of styling and interior finishes, this boat is surely fast and over the top when it comes to power. In fact, it’s powered by an RB30 Skyline GT-R mill.

It looks okay, and the sound is sure to impress onlookers, and it’s sure a sleeper, but the owner may have gone a bit around the bend in adapting the Skyline motor for the water. He says Tony Ward built the hull (once Kwikcraft), and at just 15.5 feet long, the boat is easy to tow.

The Skyline had been through many phases, but it was in 1989 that a precursor to the GT-R of today was introduced. The R32 Skyline GT-R was an all-wheel-drive machine that offered an inline-six engine that pumped out 280 horsepower. It still wasn’t sold in America, but the JDM (Japanese Domestic Market) model was - and it’s still beloved among tuners in America.

A stripped-down version of the R32 entered the Japanese Touring Car Championship in 1989 and won 29 races in a row - every race it started = over the next four seasons.

The RB30 motor was rebuilt and tuned to increase and now offers a displacement of 3.4 liters. The upgrades include a 3.4L Spool Billet 94mm Crank installed to a Borg Warner 9180 EFR turbo. You can bet all that performance took lots of time and bags of money to accomplish, and the builder says it took him more than 10 years to complete.

The upgrades to the engine mean this slick machine puts out some serious power, and the dyno figures bear that out. According to those tests, the boat pushes out 914hp and 791 lb.-ft. of torque. All that power also means the smallish boat can generate a mightly rooster tail at cruising speed.

The owner says the engine has only been used on some 10 trips, and the video also shows the boat hooked up and being trailered behind his not-desecrated Nissan Skyline GT-R. 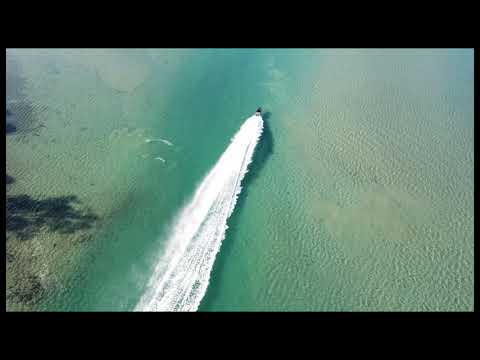