2 Best Automotive Designers Working on the Apple Car, Announcement Still on Track by 2025

4 BMW Not Necessarily Impressed With the New-Generation CarPlay

5 There’s No Reason to Be Excited About the New-Generation CarPlay
Car video reviews:
Up Next

A New Top App Is Launching on CarPlay

Working remotely has become a lot more common since 2020, and as a result, online platforms that allow people to connect, talk, and hold meetings have recorded a boom in terms of adoption.
6 photos

Microsoft Teams, for instance, has become an essential tool for lots of companies whose employees are still working from home, while Cisco’s Webex has also benefitted from the hybrid work takeoff for pretty much the same reasons.

Cisco knows that the hybrid work concept doesn’t just come down to an office at home, so the company has recently announced an update that makes perfect sense.

Move to Mobile, a new feature that will allow users to transition from desktop to iPhone, will also integrate CarPlay support, essentially making it possible to join and participate in meetings right from your car.

The process is exactly as straightforward as you’d expect it to be, and at the end of the day, it still serves its purpose very well.

First and foremost, the transition from Mac to iPhone requires users to scan a QR code to move the meeting to the smartphone, while in the car, users just need to connect their iPhones to the head unit to be able to join audio-only meetings.

Cisco says several big improvements for the CarPlay experience are already on their way, and in August, for example, users will be allowed to listen to past Webex recordings even when they are behind the wheel.

The number of apps available on CarPlay is obviously increasing, and Apple is working hard on opening the door to new categories as well. The Cupertino-based tech giant says the adoption of CarPlay is on the rise, and its system has become a must-have feature that most iPhone users can’t imagine living without. According to Apple’s stats, close to 8 in 10 new-car buyers consider CarPlay an essential feature when ordering a new vehicle. 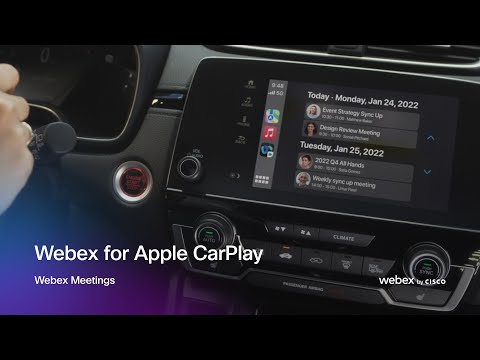