A New Presidential Limousine from GM 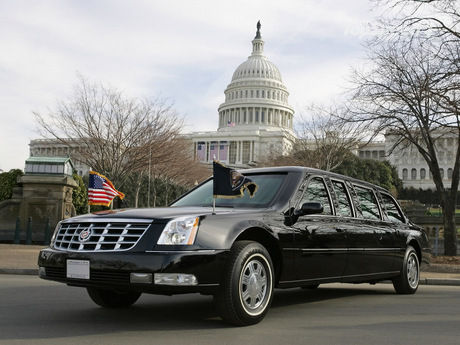 While America sits back and enjoys its great victory in naming its first African-American president, Democrat candidate Barack Obama, GM is already cooking up something special for the newly-appointed president.

A recent article published by the New York Times identifies the next presidential limo as a truck-based Cadillac and even hits us with a couple of spy shots of the car under wraps, which were taken early in the development process.

This new model comes in to replace the aging Cadillac limo that former president Bush has been using for ... presidential purposes since 2005. This car is going to be like no other out there on the market, and will reach a level of customization that we mere mortals can't even fathom.

Also, it's going to be like a fortress on wheels seeing as how America's president is one of the most loved and hated people on the planet. That's why the car will be truck-based, so that the chassis can withstand the added weight of the armor, because there's going to be plenty of that to make sure no one takes a shot at the president.

Even the 19.5-inch Goodyear regional RHS tires suggest that the car will have to handle a lot of added weight. The base for the car is believed to be the GM 2500 line of trucks. Other modifications to the outer shell of the car include the raised roof and the extra thick wide windshield pillars.

Other than that, it's tough to say anything else about this project, like the mechanics since this is a joint project between GM and the Secret Service and neither of them are willing to reveal any details, for security reasons of course.