BMW M3 Touring vs. Alfa Giulia QV Wagon Is the Battle We Crave but Will Never Get

Tudor Serban
An electric car was considered a curiosity on the streets a while ago, and nowadays, you can't leave the house without seeing one. But these vehicles have their major downside: charging time.
6 photos

Cars with bigger batteries are a relief for their owners since they can rely on their range. They usually charge them at the end of the week if they don't have a charger at home. However, even in that situation, sometimes they are faced with a challenging task: add some juice to the batteries for a short, 80 mile (130 km) trip. Since they didn't have a reservation for a fast-charger, they might wait too long for that.

Enter the scene L-Charge. Dimitry Lashin, CEO of this startup, created the company to help charge electric vehicles facing these situations. He came with a simple idea: a mobile charging station. They built a vehicle powered by a Liquid Natural Gas (LNG) powerplant, which produces less CO2 than conventional gasoline or diesel engines. The emissions made by these types of generators are, generally, lower than those produced by a coal powerplant.

In October, the Russian startup started a tour around Europe, providing free electricity in cities. It also came with a designated Android or iOS app named "Hey Charge." For the moment, the startup gathered $1.5million in funds for its ambitious project and received orders for $5 million. Apart from the mobile charging stations built on top of utility vehicles, L-Charge provides stationary generators which can be refilled with LNG tanks. Thus, they can provide electricity wherever is needed, regardless of the power grid.

Moreover, the L-Charge said that its mobile charging stations could supply enough electricity for 130 km (80 miles) in under ten minutes. Maybe that's a good idea for those who want to take their EV off-road vehicles in the woods and don't want to remain stranded between some trees without any juice left in their batteries. 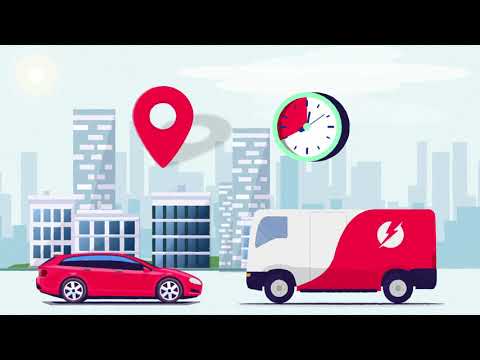