2 Elderly Daredevil Builds Twin-Engine Jet Kart, Proceeds To Race It in the Desert

3 The Rocketman Has a Blast on His ACME Pulsejet Engine-Powered Skateboard, Hits 50 Mph

5 Lucifer’s Son Would Drive this WWII Rocket-Powered Car, and You Can Have It
Car video reviews:
Up Next

Ford RS1700T: A Look Back at the Fantastic, Rally-Bred Homologation Special That Never Was

Just because the engine of your DIY twin pulsejet engine kart melts down in the middle of the ride, that’s no reason to stop having a blast through the desert with your beard flapping in the wind. Not if you want a consistent fan base.
6 photos

Robert Maddox, a.k.a. the Rocketman, is an Internet sensation. He’s in his 60s but has the passion, boldness, and restlessness of a young man, which have got him hundreds of thousands of subscribers on his YouTube channel.

Maddox is not your ordinary grandpa figure, but a daredevil who knows exactly how to approach life: never too seriously. The guy has been into flying things for as long as he can remember and he developed a passion for rockets from young childhood. He built his first airplane at the age of 10, a rocket-powered balsa wood one with Jetex rocket motors.

Later on, the Rocketman got into putting together all kinds of flamethrowers and he did it so well that people paid him good money to get their hands on his crazy contraptions. Maddox builds anything from bikes, cars, skateboards, go-karts, anything that can be powered by a pulsejet engine, really.

These days, the Rocketman dedicates most of his time to creating content for his YouTube channel, where he’s got some pretty jaw-dropping videos with him riding his insane machines, from his rocket skateboard to his “steampunk” jet bike, or his Dragon jet kart. With one hand on a selfie stick, the other one on the steering wheel, and no seat belt in sight, Maddox drives his homemade machines at full speed, spitting fire and grinning like a madman.

His latest video shows him behind the wheel of his twin pulsejet engine kart, whose engine melts down in what he claims to be a first. But our Rocketman gets out of the whole thing unharmed and amused. Take a look at how it all went down in the video below. 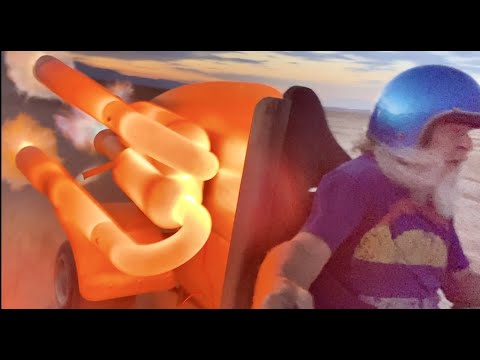