5 Lotus Club GT Gets Very Cool Introduction
Up Next

Home > News > Car Profile
Vlad Mitrache
We do realize Elon Musk's carmaking company has reached a level where it won't use other brand's products for design inspiration anymore (or even more than that), but wouldn't it be nice if it did happen?
1 photo
The Evora is arguably the best-looking Lotus model and one of the better-looking cars out there, so giving it a new lease of life by installing an electric powertrain is a decision a lot of people would welcome. However, as we've said, you can't wait for Tesla to do it if you really want it to happen.

Which is why the people at On Point decided to take matters into their own hands and make the transplant themselves. The V6 engine and the six-speed automatic transmission were removed together with all the other paraphernalia associated with an internal combustion engine, with the drive unit of a Tesla Model S P85 taking their place.

The conversion is still an ongoing process, but the car - named the Blue Lightning for obvious reasons - looks to be nearly completed, as the video below demonstrates. If the motor came from a Tesla, the battery pack was borrowed from a Chevrolet Volt.

The Blue Lightning is now more powerful than any stock Lotus Evora out there thanks to the 450 hp developed by the motor. Charging the battery is on the long side at the moment taking around ten hours, but the team is working on it and should eventually refill its batteries up to 80 percent in just 35 minutes.

This isn't your ordinary barn conversion, either. On Point has invested in the quality of the execution with such impressive features as the custom-made digital display that substitutes the instrument cluster, and with a lot others still to come.

Despite looking pretty good, the Blue Lightning has only been in the works for five months, and if the team - led by Sacha Anis - continue at this pace, the car should be ready to go in just a few more months. As you'll notice yourself after watching the video made by Speed Academy, power steering and a divider between the cabin and the motor and battery compartment are first on the list, followed closely by an actual drive selector.

As for dynamic performances, the Blue Lightning shows off a few rolling starts in the video demonstrating its stupendous acceleration, but the goal is to take the converted Lotus on the track and give Porsche 911 GT3s something to think about. Oh, and just to make things even more interesting, Sacha is also talking about an electric drift car. How about that for a future project? 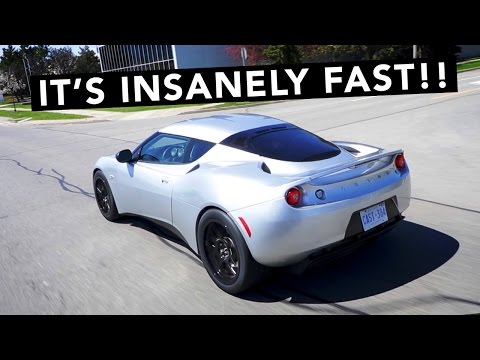