3 Is Airbus Planning to Bring Back the Concorde?

5 The Uber of the Skies Has Jay Z’s Money, and It’s Growing Big
Editorial

Home > News > U-turn
Ionut Ungureanu
Known as one of the largest aircraft at the time, the U.S. Air Force used the four-engine propeller-driven heavy bomber during World War II and the Korean War. It was not jus the size that made it one of the best, but its very advanced features too. Today, there’s only one left still in service, and there’s a video of it that was recently released.
1 photo
The 35-minute footage was posted by Erik Johnston, an aviation enthusiast who makes videos about military veterans and legendary aircraft. And a legend this Boeing truly is, dear autoevolution friends. It featured a pressurized cabin, all dual wheeled, tricycle landing gears, and a remote, electronic fire-control system that controlled four machine gun turrets.

Did we mention the manned tail gun installation that was semi-remote? Now we did. Hey, we are talking about the same model bomber that was carrying out the atomic bomb attacks on Hiroshima and Nagasaki; this is no joke, mind you. The B-29 production total was 3,970 units, out of which dozens remain as a static display but only one example, nicknamed Fifi, remains on flying status.

As a matter of fact, due to the B-29’s highly advanced design for its time, unlike many other World War II-era bombers, the Superfortress remained in service long after the war ended. Some were employed as flying television transmitters for the Stratovision company. Perhaps this is why the one in question is still capable of taking off today.

In other words, this lucky fellow spent more than half an hour detailing a one-of-a-kind legend that made history. Considering its current owner - the Commemorative Air Force, based at Addison, Texas - most likely does not make tourist tours, it’s quite safe to say this video is a noteworthy.

Aviation fan or petrolhead, you guys have to admit it's not every day you get to see the insides of such a beast. 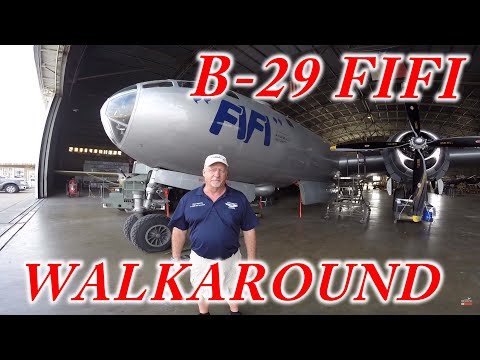