1 The 2023 Subaru Solterra Is Not a Performer, but the First of Its Kind Adventurer

5 Rare Subaru Impreza 22B STi Looking for a New Owner
Car video reviews:
Up Next

Now worth six-digit sums, the epic 22B STi was a limited production, anniversary edition of the standard Impreza that gave enthusiasts the chance to legally drive a full-blown rally car on public roads.

A Look Back at the Rally-Bred Impreza 22B STi, the Ultimate Street-Legal Subaru

Established in 1988 with the aim of building better rally cars, the Subaru Tecnica International (STi) motorsport division’s first project was the 1992 Legacy RS Turbo. As a street-legal homologation special, it was undoubtedly the craziest car that Subaru had ever offered and it was very successful in terms of sales, but in rally guise it initially proved uncompetitive. In 1993, the factory team signed up-and-coming driver Colin McRae, who managed to show the world what the RS was really capable of by securing Subaru’s first-ever WRC win at the New Zealand Rally.

In the meantime, STi engineers were working on a smaller, lighter, and faster car based on the newly introduced Impreza. To homologate it for rallying, the carmaker had launched the performance-oriented Impreza WRX (World Rally eXperimental) for the 1992 model year. After McRae’s historic triumph, the rally version of this new car made its debut at the 1993 1000 Lakes Rally in Finland, finishing second overall with Ari Vatanen behind the wheel.

During this period, the variants were some of the most sought-after performance cars on the market, but for enthusiasts who wanted to channel their inner Colin McRae, the best was yet to come. In 1998, to celebrate its 40th anniversary, as well as its success in the WRC, Subaru unveiled a limited production of the Impreza dubbed 22B STi that was more of a full-blown rally car than any STi-badged models that came before it.

Based on the WRX Type R two-door coupe chassis, the epic vehicle was easily distinguishable from all other WRX STi iterations thanks to an aggressive widebody kit. Designed by Peter Stevens, the British stylist behind Subaru’s WRC rally cars or the legendary McLaren F1, the kit broadened the width of the car by 3.15 inches (80 mm) and included custom panels like front and rear fender flairs, a unique scooped hood, a WRC-inspired front bumper complete with fog light covers, and a massive adjustable rear wing.

But there was a lot more than just these visual upgrades that made the 22B special. Its chassis was strengthened and equipped with motorsport-derived hardware. The suspension geometry was revamped and Bilstein competition-spec coilovers. Braking was also improved with red painted, four-piston front and two-piston rear calipers that hugged large, vented rotors.

Under the hood, the limited-edition beast hid a unique 2.2-liter turbocharged flat-four codenamed EJ22G. It was built around an aluminum block from a third-gen EJ20G that was bored up to 3.81 inches (96.9 mm) and fitted with a bespoke closed-deck crankcase. It was equipped with identical cylinder heads, forged pistons, an electronic fuel injection system, and an IHI RHF 5HB turbocharger.

Linked to a five-speed manual through a sintered twin clutch with a ceramic disk, it could produce 276 hp and send 268 lb-ft (363 Nm) of torque to all four wheels as early as 3200 rpm. At the time of the 22B’s release, Japanese manufacturers had an informal gentleman’s agreement that limited the advertised output of any engine to 276 hp, so according to many experts and owners, the EJ22G’s true potential stood around the 300 hp mark.

All that power combined with an exceptional 4WD system meant that the 2,800-pound (1,270-kg) Subaru was an absolute joy to drive. There were few street-legal performance cars that could rival the rally-derived machine, which made it incredibly desirable.

When the carmaker revealed the car to the public, all 400 units available exclusively for the Japanese market were sold in just 48 hours. An additional run of 24 units was subsequently produced for export markets. Out of these, three were prototypes, five made their way to Australia, and 16 were delivered to the UK where they received additional tuning from engineering experts and Subaru partners Prodrive who equipped the cars with longer gear ratios, and UK specification lights.

While other fantastic Impreza-based WRX STi versions were unleashed in the decades that followed, the 22B remains the most epic and sought-after of them all. A rare, no-nonsense rally weapon that one can legally drive on public roads, it’s currently valued at around $300,000. In 2021, chassis number 156, which was imported into the U.S. a year earlier, sold through the Bring a Trailer platform for $312,555.

In the YouTube video below, you can watch an in-depth review of this legendary vehicle by the one and only Doug DeMuro. 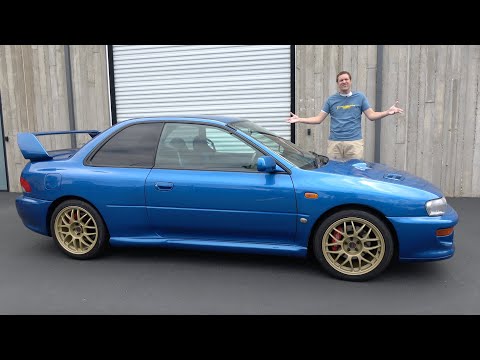