1 Engage in Warbird Dogfights with The Falconeer: Warrior Edition (Consoles/PC)

3 Fly to Space With SpaceX’s First Civilian Mission, but From Your Couch

A Look Back at No Man's Sky's Story of Redemption, a Space Saga in 17 Acts

Cosmin Vasile
When No Man’s Sky made its debut on PlayStation five years ago, it became clear that the game’s development cycle was too short compared to what people’s high expectations. The fact that Sony and developer Hello Games hyped the game beyond what it really was didn’t help either, so No Man’s Sky ended up being a total fiasco.
9 photos

It’s incredible that a small studio with less than 30 employees has been able to pour out so many big No Man’s Sky updates in just five years. The first important No Man’s Sky update, Foundation came just 10 weeks after the main game and introduced base building for the first time. It was a fitting name for an update that really became the foundation for what the game’s development roadmap will look like in the coming years.

The first few major updates had such a high impact on No Man’s Sky that it was like playing a completely different game. It took Hello Games two years to add multiplayer to PlayStation players, something that was promised at launch. And the improvements didn’t stop here. Two years ago, Hello Games added PlayStation VR support to No Man’s Sky, and let me tell you that playing this game in virtual reality is truly the ultimate space exploration experience.

The launch of PlayStation 5 version back in 2020 was another big achievement for No Man’s Sky not just because of the obvious visual enhancements, but also due to the many improvements to various aspects of the game. The so-called Next Generation update introduced richer base construction, fuller worlds with denser alien environments than ever before, terrain populated with thicker grasses, flowers, fungi and rocks, as well as, for the first time, 32 player multiplayer.


Then, in 2021, Hello Games unleashed the Companions update, a new piece of content that allows players to tame, breed, train and even speak to the creatures they meet on the alien planets they visit. Once tamed, these animals will travel with you as you continue to explore the universe and will act as a valuable aide since you can train them to scan for resources, provide light, find settlements, or even hunt for dangerous fauna. As your bond with your pet deepens, they may lay eggs which can be collected and incubated in the Pokemon-like fashion.

Two months ago, Hello Games released the newest No Man’s Sky update dubbed Prisms. With the Prism update, developers visually overhauled the space exploration game to the point that no part has been left untouched. No Man’s Sky looks better than ever no matter on what platform you’re playing. New weather and lighting effects have been added, more detailed environments and greater variety of generation.

Today marks the fifth anniversary of No Man’s Sky, and developer Hello Games has another surprise for its fanbase: a new expansion. Although details are scarce, we know Frontiers, the name of the upcoming expansion, will be launched in 2021.

Sean Murray, Hello Games’ Founder, teased the new Frontiers expansion: “in some ways, it is just another update, but in other ways it’s a missing piece of the sci-fi fantasy that we’ve always wanted to add, and very fitting for out fifth anniversary.”

More importantly, Frontiers will be just another step on Hello Game’s voyage to redemption, as the studio has a lot more content to add to the game. We can’t wait to see how the journey unfolds because every new piece of content released until now made No Man’s Sky an even better sci-fi experience. 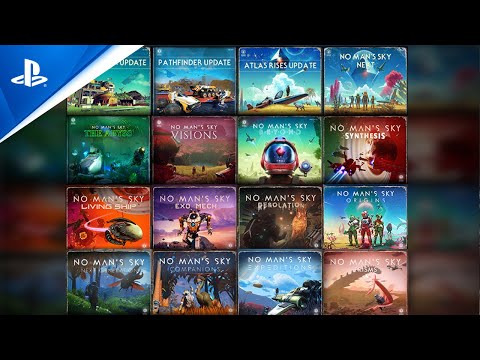