1 Believe It or Not, This 1,750-HP Crate Engine Is Meant for Your Custom Daily Driver

2 The History of the Iconic HEMI: From Modern Workhorse to the Epic Hellcat and Demon

3 The History of the Iconic HEMI: From Experimental Aircraft Engine to the 426 Elephant

In 1958, Chevrolet introduced the W-series engine. No, the General Motors division did not release a W-layout motor half a century before the VW Group, but a large V8 that laid the foundation for the corporation’s big-block lineage.

A Look Back at Chevrolet’s Iconic W Engine, the First in a Long Line of Big-Blocks

Development of this legendary series kicked off in 1955 when engineers realized that the new 265 ci (4.3 liters) small-block V8 was not powerful nor reliable enough (under high-rpm usage) for the division’s future vehicles - specifically its trucks and larger passenger cars.

A bigger motor was a must, so the brightest engineering minds available in Chevy’s fold teamed up to create one. Many think that it was just a larger block version of the 265, but in fact, the W featured a radically different design.

Released in 1958, the engine was devised to be enlargeable for increased displacement applications as well as higher compression ratios but remained sufficiently compact (by 1950s standards) to fit inside the engine bays of passenger cars. The iron block’s decks were angled at 74 degrees from the crankshaft centerline, while a wedge-shaped, 16-degree combustion chamber stood between the top of each piston and the flat head face. This chamber design was inspired by the in-cylinder layout of the revolutionary 283-ci (4.6-liter) small-block introduced a year earlier.

The 348-ci (5.7-liter) naturally-aspirated, big-block was curiously dubbed Turbo-Trust and was originally conceived for trucks, but as I mentioned before, engineers were also aiming to use it on several passenger car models. To make it suitable for both applications, they came up with a simple trick in the form of a relief groove was cut into the top of the cylinder wall. This feature was present on the blocks that were intended for trucks to help lower the compression ratio, whereas those built for cars had conventional cylinder walls which, together with various height piston dome configurations, favored higher compression ratios.

The 348 weighed about 125 pounds (56.7 kg) more than the 283 small-block, but the added weight translated into a bombproof block with cylinders that ended up being almost invulnerable to pre-ignition.

With a four-barrel, 450-cfm carburetor, the base engine produced 250 hp. Next in line was the Super Turbo-Thrust that came with three two-barrel, 225-cfm carbs. Under usual driving conditions, only the center carburetor worked, but when the gas pedal was pushed with real purpose, a vacuum switch awoke the other two carburetors that improved power to 280 horses. The top 1958 version named Special Turbo-Thrust was equipped with a single four-barrel carb and was capable of 305 hp.

For 1959 and 1960, high-output editions of the top two engines were produced with 320 hp and 335 hp, respectively. 1960 also saw the introduction of a 315-hp Special Super Turbo-Thrust that was upgraded with mechanical lifters and triple two-barrel carburetors. In 1961, the last year of production for the 348, power was increased again to 340 hp for the single four-barrel and 350 hp for the triple-carb unit.

For the 1961 model year, Chevy unleashed a larger-displacement variant of the W-series. Bored and stroked to 409 ci (6.7 liters), it debuted in the Impala SS (Super Sport) with a single four-barrel carburetor and could produce 360 hp, then 380 hp in 1962.

A dual four-barrel version followed, spitting out no less than 409 hp, thus developing 1 hp per cubic inch. It had a forged steel crankshaft and a beefed-up aluminum intake. In 1963, output for this variant reached 425 hp thanks to a compression ratio of 11:1 and a solid lifter camshaft. The 409 was available through mid-1965 when it was replaced by the 396-ci (6.5-liter) Mark IV.

The holy grail of the W-series was a special 427-ci (7.0-liter) version of the 409 that could be ordered with the drag-oriented Chevrolet Regular Production Option (RPO) Z11 for the 1963 Impala Sport Coupe. Conservatively rated at 430 hp, this engine was fitted to only fifty Z11 Impalas.

Although it was in service for less than a decade, the W paved the way for a long line of Chevy big-blocks, including the highly successful 427-ci (7.0-liter) Mark IV or its race-bred ZL1 sibling. Today, both 348 and 409 versions are still around, enjoying legendary status among the hot rod community for their reliability and ease of tuning. The list of aftermarket hardware still available for the W is so extensive that you can build one from scratch without requiring a single OEM component.

If you would like to know more about this iconic powerplant, we recommend the video below posted on YouTube by OldCarMemories.com. 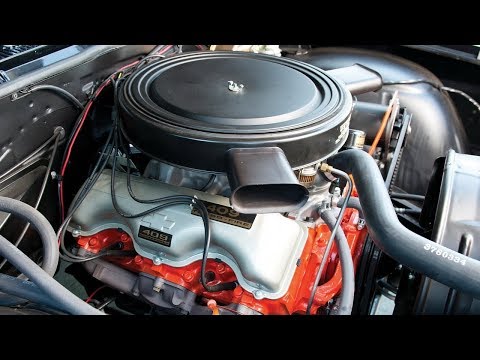